"Mr Modi, wherever, he goes, he lies. He goes to Andhra Pradesh, he lies, he goes to the Northeast, he lies," Rahul Gandhi said.

On a day The Hindu newspaper published a report on anti-corruption conditions being dropped from the supply clause of the Rafale jet deal, Rahul Gandhi launched another fierce attack on Prime Minister Narendra Modi from the spot where Andhra Pradesh chief minister N Chandrababu Naidu sat on a day-long fast. "PM has taken Andhra money and given it to Anil Ambani," the Congress president declared, repeating his allegation of corruption in the 36-jet deal to benefit the industrialist.

Mr Naidu, who quit the BJP-led National Democratic Alliance last year, sat on a hunger strike to press for special status for Andhra Pradesh and urge the centre to fulfil promises made when Telangana was carved out of Andhra Pradesh in 2014. On Sunday, PM Modi had at a rally in Andhra Pradesh accused Mr Naidu of wasting public money on political campaigns. 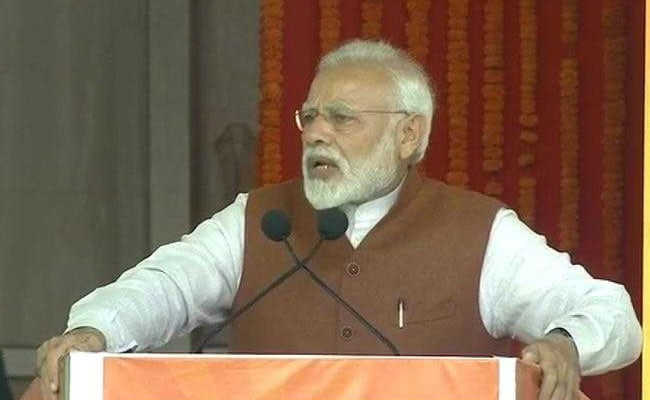 On Sunday, PM Modi had at a rally in Andhra Pradesh accused N Chandrababu Naidu of wasting public money on political campaigns

"Mr Modi, wherever he goes, he lies. He goes to Andhra, he lies, he goes to the Northeast, he lies," the Congress president added.

The Hindu newspaper has reported that provisions for anti-corruption penalties and an escrow account for payments were dropped days before the Rafale deal was signed, in what it calls "major and unprecedented concessions" from a government that has repeatedly stressed on fighting corruption in defence deals.

The newspaper had earlier reported on defence ministry objections to "parallel negotiations" conducted by the Prime Minister's Office.

The Congress alleges that the government finalised an overpriced deal for 36 Rafale fighter jets at an inflated price to benefit Anil Ambani, whose inexperienced defence firm was recommended as an offset partner for Dassault, the company manufacturing the aircraft. Both Dassault and the government have denied the allegations.