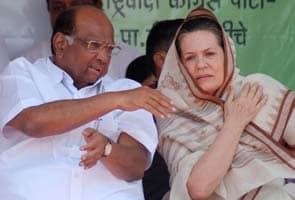 New Delhi: The Congress today began the process of trying to build consensus for the government's candidate for the presidential election to be held in July when Pratibha Patil's five-year term expires. No date has been announced yet.

This evening, Agriculture Minister Sharad Pawar who heads the Nationalist Congress Party met Sonia Gandhi, who is the chairperson of the Congress-led UPA coalition at the Centre.

"We want a name with consensus," Mr Tripathi said when asked about NCP's preference for the next President.

The Congress is backing Hamid Ansari, currently the Vice-President. Mrs Gandhi has also decided to send an emissary to Tamil Nadu to win the support of M Karunanidhi, who heads the DMK, a senior partner in the UPA. RJD chief Lalu Prasad had come out in Mr Ansari's support yesterday.

Key UPA ally Trinamool Congress today maintained that it would decide on a Presidential nominee only after the date for the election to the top post is announced. Railway Minister Mukul Roy said it would be too premature to decide on a candidate now.

Trinamool's support is crucial for the victory of a UPA candidate.

The Opposition BJP has decided to put up its own candidate for the election, and is reportedly supporting nuclear scientist APJ Abdul Kalam, who served as President from 2002 to 2007 but did not stand for re-election when his term expired. The BJP sees the presidential election as a chance to challenge the government's strength.

Some unconfirmed reports say that Mulayam Singh Yadav, who heads the Samajwadi Party, is also keen on running for President.

The President is elected by members of the Lok Sabha, Rajya Sabha and all state legislatures or Vidhan Sabhas by a system of proportional representation through single transferable vote. The ballot paper lists all candidates standing for election and the voters list them in order of preference. A threshold number of votes, known as the 'quota' is set, which candidates have to achieve to be elected. For presidential elections, the quota is set at one more than half the number of votes.

Promoted
Listen to the latest songs, only on JioSaavn.com
The election is designed to provide parity between members of parliament and members of state assemblies.  The number of MLAs or elected representatives in state assemblies depends on the population of that state. The presidential election assigns a weightage to the votes cast by each state, so that finally, the states have an equal say with Parliament in who becomes President. Without this system, the President would be elected purely on the basis of the party or group that has the maximum numbers in Parliament.