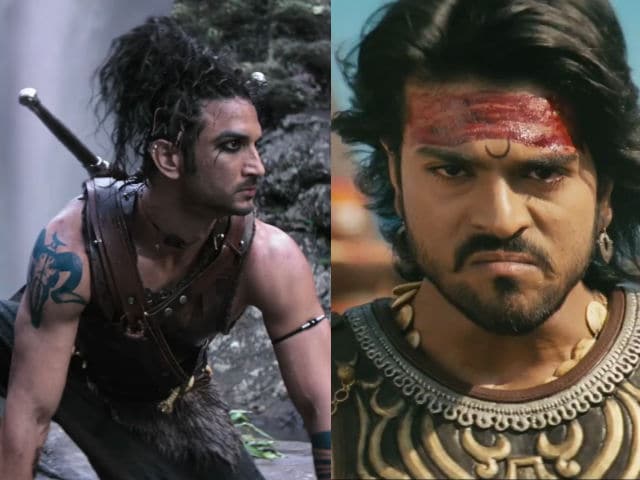 Sushant Singh Rajput in Raabta and Ram Charan in Magadheera

New Delhi: The makers of Telugu film Magadheera are seeking injunction against the release of Sushant Singh Rajput and Kriti Sanon's new film Raabta alleging plagiarism. Trade analyst Taran Adarsh shared a statement signed by Allu Aravind of Geetha Arts (the producers of Magadheera) in which he says the 'original makers' of the S S Rajamouli-directed film felt "through various sources including the trailer and publicity sources" that Dinesh Vijan-directed Raabta is "being remade violating copy rights." Magadheera makers alleged that Raabta "copied its unique story and plot line." Raabta's trailer released in April and fans of the S S Rajamouli-directed film drew similarities between Magadheera and the Dinesh Vijan-directed film including the look and appearance of the lead actors - Ram Charan in Magadheera and Sushant in Raabta.

"A Hyderabad court issued a notice and posted the matter to June 1 to decide whether the film (Raabta) must be permitted to release on June 9," read the statement.

Here's the statement from Allu Aravind tweeted by Taran Adarsh:

Magadheera, starring Ram Charan and Kajal Aggarwal, released on 2009. The film is a reincarnation tale of two lovers who were separated by an evil schemer and centuries later they get a chance to reunite but their old enemy is also reborn and is close to them. Raabta's trailer depicts a similar plot. In a recent interview to IANS, Sushant while describing his character in Raabta said: "The story has captured two eras. In one, I am playing a happy-go-lucky boy who falls in love with a girl. And in the other part, I am playing the character of a warrior." The description is quite similar to the two roles played by Ram Charan - warrior Kala Bhairava and present-day's Harsha.


Watch the trailer of Magadheera:


Raabta is produced by Homi Adajania and stars Neerja actor Jim Sarbh as the antagonist. Actor Rajkummar Rao has an interesting cameo in which he plays the role of a 324-year-old man. Deepika Padukone also stars in a special song for the film. Raabta is scheduled to hit the screens on June 9.
Comments
raabta magadheraraabta magadhera plotraabta magadhera storyraabta sushant singh rajputmagadheera rajamouli