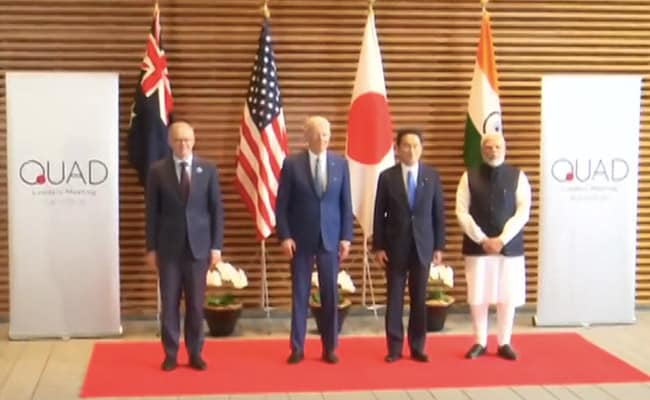 The Quad Leaders' Summit is expected to focus on various initiatives launched by the four-nation grouping which includes US, India, Japan and Australia and discuss developments in the Indo-Pacific region.

PM Modi, who left for Japan on Sunday to attend the meeting at the invitation of Japan premier Fumio Kishida, will also hold bilateral meetings with his Japanese counterpart and US President Joe Biden on the margins of the summit today.

"The Quad summit provides an opportunity for the leaders to exchange views about developments in the Indo-Pacific region and contemporary global issues of mutual interest," External Affairs Ministry spokesperson Arindam Bagchi said.

Here are the highlights on Quad Meeting In Japan:

Get NDTV UpdatesTurn on notifications to receive alerts as this story develops.
May 24, 2022 19:23 (IST)

China, Russia Fighter Jets Fly Nearby As Quad Met, Says Japan
Chinese and Russian fighter jets carried out joint flights over the Sea of Japan and the East China Sea on Tuesday as leaders of the Quad bloc met in Tokyo.
May 24, 2022 17:32 (IST)
At Quad Summit, PM Modi Reiterates India's Principled Position On Ukraine
Prime Minister Narendra Modi on Tuesday highlighted India's consistent and principled position on the need for cessation of hostilities, resumption of dialogue and diplomacy, at the second in-person Quad Leaders' Summit in Tokyo.
PM Modi, along with leaders of the Quad nations took part in the fourth interaction of the leaders, which saw criticism of Russian military action in Ukraine, from Australia, Japan and the United States.
India on several bilateral and multiracial forums has said that it stands for the diplomacy path amid the Ukraine conflict that has led to heavy casualties on both sides and largescale humanitarian crisis in Europe.
May 24, 2022 16:37 (IST)
Quad nations warn against 'change by force' with eyes on China
Leaders of Japan, India, Australia and the United States warned Tuesday against attempts to "change the status quo by force" as concerns grow about whether China could invade self-ruled Taiwan.

A joint statement by the so-called Quad bloc avoided any direct mention of China's growing military power in the region, but left little doubt about where its concerns lie.

The carefully worded document also made reference to the conflict in Ukraine, but without offering any joint position on the Russian invasion that India has pointedly declined to condemn.

The Quad's other members have been less coy about their view that a strong response to Russia's war is needed, one that would a message that will deter other countries, including China.

"As Russia's invasion of Ukraine is shaking the fundamental principles of the international order... (we) confirmed that unilateral attempts to change the status quo by force will never be tolerated anywhere, particularly in the Indo-Pacific region," Japan's Prime Minister Fumio Kishida said, using another term for the Asia-Pacific.
May 24, 2022 14:41 (IST)

Pleased to meet Foreign Minister Yoshimasa Hayashi on the sidelines of the Quad Summit.

Exchanged views on regional and global issues. Will cooperate closely in this respect.

Leaders of the Quad grouping of countries, including PM Narendra Modi, shared concerns over the situation in Ukraine at their meeting in Tokyo, Japanese Prime Minister Fumio Kishida said on Tuesday.

"The four leaders had candid discussion on the impact of the Ukraine situation on the Indo-Pacific region, and we, including India, expressed our concern over the tragic war in Ukraine, and confirmed that principles such as the rule of law, sovereignty and territorial integrity should be observed in any region," Kishida said.

On A Ligher Note: Why Biden Told New Australia PM "You Can Fall Asleep Now" At Quad Meet
Wishing a newly elected fellow world leader good luck is one thing, but US President Joe Biden also wants Australia's Anthony Albanese to have a good night.
May 24, 2022 11:30 (IST)
Watch NDTV's Coverage Of Quad Summit

#QuadSummit | "We discussed the ongoing effects of Russia's brutal and non-justified invasion of Ukraine and the effect it has on the entire global world order": US President Joe Biden during the bilateral meeting with PM Modi pic.twitter.com/72DIMCjsLy

May 24, 2022 11:21 (IST)
Quad LIVE: PM Modi Holds Talks With US President Joe Biden
Prime Minister Narendra Modi met US President Joe Biden in Tokyo on Tuesday shortly after holding the Quad Leaders' Summit. The meeting marks a continuation of their regular dialogue having interacted most recently in virtual mode on April 11. The two leaders are expected to review the India-US Strategic Partnership and follow up on discussions held during PM's bilateral meeting with President Biden in September 2021. They will also exchange views on regional and global developments of shared interest.
May 24, 2022 10:55 (IST)

Checking China With "Asian NATO": What Is The Quad Alliance
Leaders of the "Quad" -- the United States, India, Australia and Japan -- met in Tokyo on Tuesday, cementing an alliance designed to counter China's push across the Asia-Pacific region.
May 24, 2022 09:58 (IST)

'Quad Not A Passing Fad, Means Business': Joe Biden's Message To China
US President Joe Biden today said that Quad is "not just a passing fad but it means business," asserting that the four leaders of the grouping are here to get things done for the region and that he is proud of what they are building together.
May 24, 2022 09:27 (IST)

United by shared democratic values. Committed to a free, open and inclusive Indo-Pacific.

The Quad Leaders' Summit with PM @narendramodi, PM @AlboMP of Australia, PM @kishida230 of Japan and President @JoeBiden of USA @POTUS gets underway in Tokyo. pic.twitter.com/gaiWiwNTp7

#QuadSummit | "As long as Russia continues the war, US will work with its partners for global response": US President Joe Biden pic.twitter.com/lMbqJgrM3j

Ukraine Crisis Not Regional But "A Global Issue": Joe Biden At Quad Meet
The crisis in Ukraine is a global issue, not a regional one, U.S. President Joe Biden said at a meeting of the Quad grouping of countries in Tokyo on Tuesday.
May 24, 2022 07:56 (IST)
Watch Quad's NDTV Coverage

May 24, 2022 07:29 (IST)
Putin is just trying to extinguish a culture. This is more than just a European issue, it's a global issue. Global food crisis may worsen by Russia blocking Ukraine from exporting its grains. As long as Russia continues the war, US will work with its partners: US President Biden
May 24, 2022 07:25 (IST)
Quad has made an important place for itself before the world in such a short span of time. Today, Quad's scope has become extensive, its form effective. Our mutual trust, and our determination is giving new energy & enthusiasm to democratic powers: PM Modi at Quad Leaders' Summit
May 24, 2022 07:22 (IST)

May 24, 2022 07:18 (IST)
Quad leaders meet in Tokyo at 2nd in-person summit
Prime Minister Narendra Modi and leaders of the United States, Japan and Australia on Tuesday attended the second in-person meeting of Quad leaders in Tokyo during which they are expected to exchange views about developments in the Indo-Pacific region and global issues of mutual interest.
The Quad or Quadrilateral Security Dialogue comprises India, the US, Japan and Australia.
Besides Modi, the Quad summit is being attended by US President Joe Biden, Japanese Prime Minister Fumio Kishida and Australia's newly-elected Prime Minister Anthony Albanese.
May 24, 2022 07:06 (IST)
Quad Leaders Pose For Group Photograph 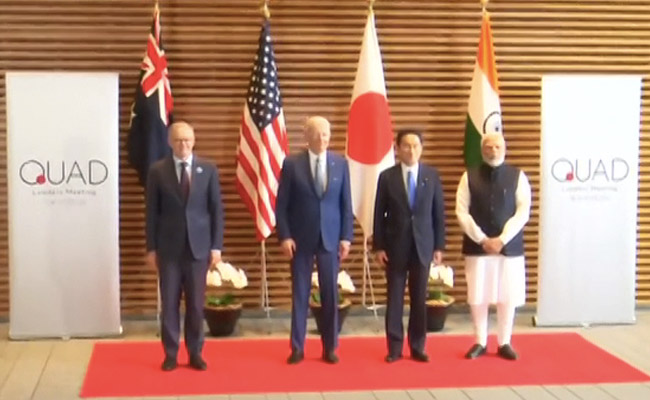 Japan Hosts Quad Summit Seeking Unity On Countering China
The leaders of Japan, India, Australia and the United States meet in Tokyo on Tuesday seeking common ground on countering China's growing regional economic and military clout.
May 24, 2022 06:36 (IST)
Quad leaders set to discuss ways to further solidify cooperation in Indo-Pacific
Laying a long-term strategic groundwork to further solidify cooperation for a free, open and inclusive Indo-Pacific and delving into the implications of the Russian invasion of Ukraine are expected to be the central focus of the second in-person summit of Quad leaders in Tokyo on Tuesday.
The leaders of the Quad comprising India, the United States, Australia and Japan are set to demonstrate that the grouping is a "force for global good" and has a unifying commitment to a rules-based international order amid China's increasingly intimidatory behaviour.