A statement from the Ministry of External Affairs said the leaders will exchange views about important developments in the Indo-Pacific. 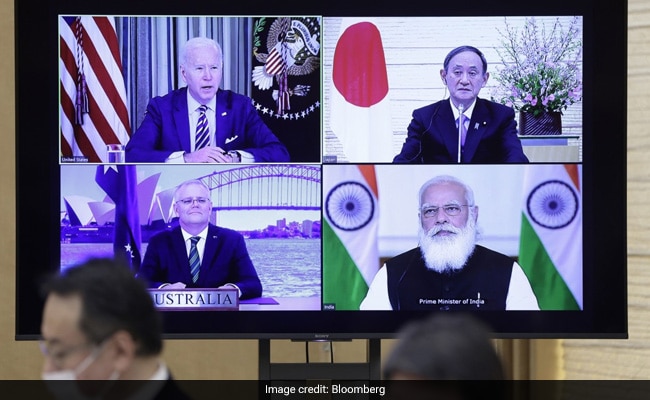 The leaders last met in September 2021 at Washington DC. File

The leaders last met in September 2021 at Washington DC. A statement from the Ministry of External Affairs said the virtual summit will provide them with an opportunity to continue their dialogue and they will exchange views about important developments in the Indo-Pacific.

Significantly, the virtual summit is taking place against the backdrop of the Russian invasion of Ukraine. While India has chosen to abstain from votes in the United Nations against Russia, the three other members of Quad have backed Ukraine.

While the US leads the international community in bringing crippling sanctions against the Vladimir Putin-led regime, Australia has called for Russia to be treated as a "pariah state" and reached out to provide aid to Ukraine as it puts up a defiant stand against the superpower. Japan, too, has imposed sanctions on Russian entities and offered to take in Ukrainians fleeing from war.

India has had a long-standing relationship with Russia and its ties with the US have strengthened significantly over the past few years. Against the backdrop of Chinese aggression on its borders, India is walking a tightrope in its equations with Washington DC and Moscow.

The Joe Biden administration is trying to urge India to take a "clear position" on the Ukraine crisis, US diplomat Donald Lu said, news agency ANI has reported.

"India has focused on two things when trying to explain its position, one that it continues to want to leave on the table the possibility of a diplomatic resolution of this conflict. The second thing that they emphasise is India has 18,000 students still in Ukraine, and they are trying to work with both the Governments of Ukraine and Russia to safeguard those," the top US diplomat stated.

India has drawn criticism from US lawmakers, both Republicans and Democrats, at a hearing on the "US relationship with India" for being among 35 nations that abstained from a UN vote to rebuke Russia's invasion yesterday.

Responding to criticism made by the lawmakers of the Senate Foreign Relations Committee, Mr Lu said, "Let me say that all of us have been working to urge India to take a clear position, a position opposed to Russia's actions."

"The State Department continues to engage India closely to underscore the importance of a collective response and condemning Russia's invasion," he added.

Earlier, Russia's mission to India has said it is "highly appreciative" of India's "independent and balanced" position at the UN.

India has also reached out to Russia for help in bringing back its citizens stuck in war-hit Ukraine.

Prime Minister Modi has spoken to Russian President Vladimir Putin and discussed the situation in the eastern Ukrainian city of Kharkiv, where over a thousand Indian students are stranded.

Kharkiv is virtually under Russian control and the girl students have already been sent on their way to Ukraine's western border by train with the help of Russians, government sources told NDTV. Efforts are on to evacuate the boys too.