Families of the victims have blamed the Gurdaspur district administration for failing to shut down the "illegal" unit despite repeated pleas. 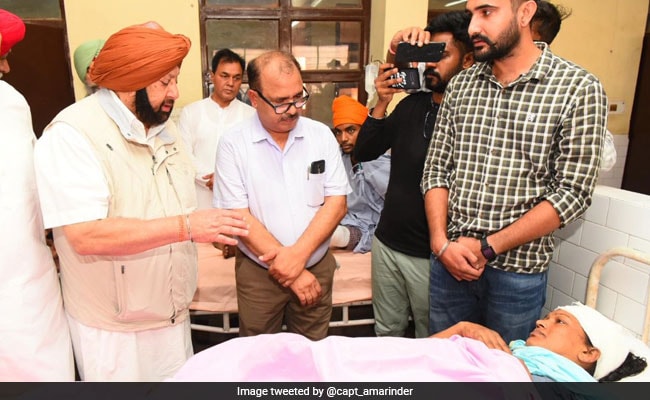 Two days after 23 people were killed in a blast at a firecracker factory, Punjab Chief Minister Amarinder Singh today ordered a state-wide crackdown on all illegal firecracker manufacturing units operating from residential and congested areas.

He also directed the chief secretary and the director general of police to take immediate steps for the closure of illegal firecracker manufacturing units and initiate precautionary measures to ensure that such incidents do not happen in future.

Families of the victims have blamed the Gurdaspur district administration for failing to shut down the "illegal" unit despite repeated pleas.

"I can assure you that I will set up a committee headed by the chief secretary and the director general of police to carry out inspections across Punjab to find such factories and we will shut them down. We will not allow these to carry on," the chief minister told reporters, after visiting the blast site and meeting some of the victims in hospital.

To a question, he said of the 23 killed in the blast, one is yet to be identified.

Asserting that firecracker factories should not be allowed in crowded places, Mr Singh said a magisterial inquiry has already been ordered in the blast and its report will come out soon. "I want to know through this inquiry how this (blast) happened," Mr Singh said.

When pointed out that an inquiry report of a similar incident that happened in January 2017 is still pending, the chief minister expressed surprise and said officials responsible for this inordinate delay will be held accountable.

"Why has nothing come out? How were they (factory owners) allowed to carry on?" Singh wondered.

He said since the incident happened two months before he took over as chief minister in March 2017, an inquiry will be initiated into why the probe has not been concluded even after over two-and-a half years.

About raising the ex gratia amount for the victims, the chief minister said he cannot change the standard procedure for fixing compensation.

The state has already announced an ex gratia of Rs 2 lakh to the next of the kin of those dead and free and best possible treatment to the injured, he said, adding the state government will release compensation for damaged properties immediately after receiving a report from the deputy commissioner.