Counting of votes will start at 8 am at 117 centres in 66 locations, said Punjab Chief Electoral Officer S Karuna Raju on Wednesday. 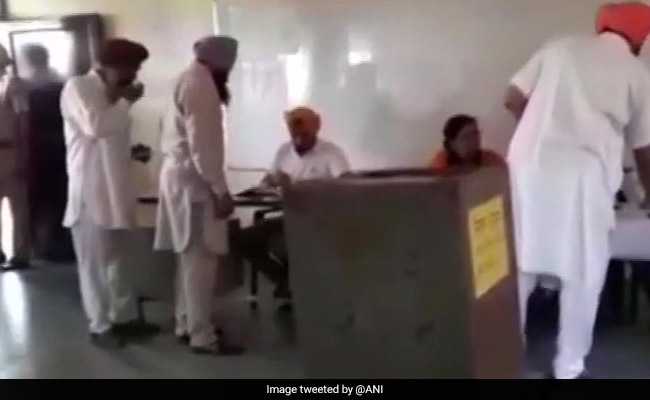 A total of 1,304 candidates, including 93 women and two transgenders, were in the fray.

The stage is set for counting of votes on Thursday for 117 assembly seats in Punjab where the Arvind Kejriwal-led AAP has emerged as a major contender while the Congress is seeking to retain power in the multi-cornered contest.

Various exit polls have predicted that the Aam Aadmi Party (AAP) will form the next government in Punjab but a few have also forecast a hung assembly in the state which had witnessed a high-stakes contest on February 20.

Counting of votes will start at 8 am at 117 centres in 66 locations, said Punjab Chief Electoral Officer S Karuna Raju on Wednesday.

A total of 1,304 candidates, including 93 women and two transgenders, were in the fray.

The state recorded voter turnout of 71.95 per cent. It was the lowest percentage as compared to the voting percentage observed in three previous assembly elections.

Though various exit polls predicted that the Congress would not be able to form the government for the second time in a row, Punjab Congress leaders have insisted that their party would secure victory.

AAP's chief ministerial face and state unit head Bhagwant Mann has also expressed confidence that his party would form the next government in the state.

Shiromani Akali Dal (SAD) chief Sukhbir Badal had claimed that his party, which fought elections in alliance with the Bahujan Samaj Party, would win over 80 seats.

The BJP has said that it will make impressive gains while former chief minister Amarinder Singh has said that this party, the Punjab Lok Congress, and the BJP have done well in the elections.

The AAP has sought to project itself as an agent of change and designed its poll campaign in such a way that the people vote for 'badlav' (change) as it targeted the traditional political parties for “looting” the state.

It also announced its CM face ahead of polls to give clarity to voters.

The SAD and the Congress have alternatively been forming the government after the reorganistaion of Punjab in 1966.

The stakes are high for the Congress which is looking to retain power in Punjab. It announced Charanjit Singh Channi as the CM face and was hoping for the consolidation of the Scheduled Caste votes. Punjab has nearly 32 per cent Scheduled Caste population.

The stakes are also high for the SAD which contested the polls in alliance with the BSP after breaking electoral ties with the BJP in 2020 over farm laws issue.

With Sukhbir Singh Badal in the driving seat, the SAD is hoping for making a comeback after it was relegated to the third spot in the 2017 assembly polls.

The BJP, which used to be a junior partner during its previous alliance with the SAD, was fighting the elections as a major partner after entering into an alliance with the Amarinder Singh-led Punjab Lok Congress and Sukhdev Singh Dhindsa-led SAD (Sanyukt).

The BJP is hopeful of getting a good response especially in Hindu dominated urban and semi-urban areas. The Sanyukt Samaj Morcha, comprising various Punjab farmer bodies which had taken part in the stir against the Centre's now-repealed farm laws, fought the polls in alliance with the Haryana Bharatiya Kisan Union (Chaduni) leader Gurnam Singh Chaduni-led Sanyukt Sangharsh Party.             All major political parties promised a host of freebies and sops to woo voters in order to form the next government in the state.

Key constituencies where result would be keenly watched included Chamkaur Sahib constituency from where Mr Channi is seeking a re-election. He also contested from the Bhadaur assembly seat in Barnala district.

The poll fight in Amritsar East constituency is considered as the mother of all electoral battles. Punjab Congress chief Navjot Singh Sidhu fought against SAD leader Bikram Singh Majithia from this seat.     Mann was trying his luck from Dhuri seat as he fought against sitting MLA and Congress nominee Dalvir Singh Goldy.

Amarinder Singh, who was unseated by the Congress last year from the post of chief minister following a bitter feud with Mr Sidhu, contested from his home turf Patiala Urban seat.

In the 2017 Punjab assembly polls, the Congress had ended the SAD-BJP combine ten year regime by bagging 77 seats out of the total 117-assembly segments in the state.

The AAP had managed to get 20 seats, while the SAD-BJP had won 18 seats and two seats went into the kitty of the Lok Insaaf Party.