Read inOther Languages
This Article is From Jan 06, 2019 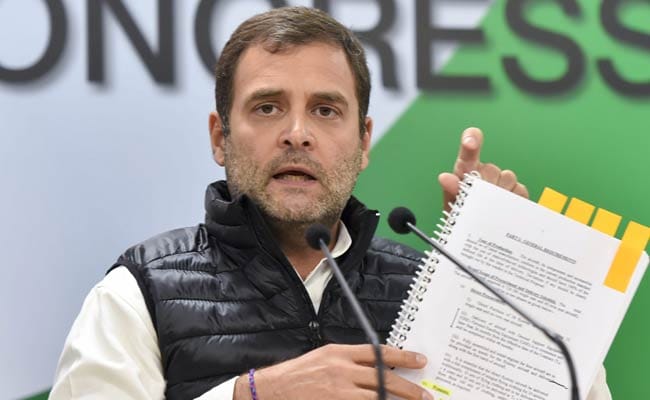 HAL issue: "When you tell one lie, you need to keep spinning out more lies..." Rahul Gandhi said

Congress chief Rahul Gandhi and senior party leader Randeep Surjewala have accused Defence Minister Nirmala Sitharaman of lying about procurement orders worth Rs 1 lakh crore for Hindustan Aeronautics Limited or HAL. The defence manufacturer, Mr Surjewala said, has not received a single order and had to take a loan to pay the salaries of its employees. Mr Gandhi said Ms Sitharaman must place documents of the government orders before parliament, or resign.

The allegations came after media reports claimed HAL, grappling with low finances, had been forced to borrow money to pay its employees' salaries. The Times of India reported that though the process of ordering has been started, no actual orders have been placed yet. HAL is yet to comment on the matter.

Mr Gandhi's tweet read: "When you tell one lie, you need to keep spinning out more lies, to cover up the first one. In her eagerness to defend the PM's Rafale lie, the RM lied to Parliament. Tomorrow, RM must place before Parliament documents showing 1 Lakh crore of Govt orders to HAL. Or resign."

The Congress alleges that the government had been giving short shrift to HAL to favour Anil Ambani's rookie defence firm, which is receiving an offset contract with Dassault Aviation, the manufacturer of the Rafale jet fighter.

During the discussion on Rafale in Lok Sabha on Friday, Defence Minister Nirmala Sitharaman said the government has given extensive contracts to HAL.

The government has entered a 36-aircraft deal with Rafale, which the Congress alleges, is far overpriced compared to the 126-aircraft deal negotiated by the UPA government, to help Mr Ambani's firm. Under the UPA deal, HAL was expected to manufacture the fighter planes in India.

Both the government and Anil Ambani have rejected the allegations.

During the discussion on Rafale in Lok Sabha on Friday, Ms Sitharaman said the government has given extensive contracts to HAL. "The Congress is shedding crocodile tears for HAL. The Congress government gave 53 waivers to HAL... We have given contracts worth Rs 1 lakh crore," the defence minister had said.

In a tweet today, Mr Surjewala said: "The Lying Defence Minister's Lies Gets Exposed! Def Min claimed that procurement orders worth Rs 1 Lakh Cr provided to HAL! HAL says Not a SINGLE PAISA has come, as Not a SINGLE ORDER has been signed! For the first time, HAL forced to take a loan of Rs 1000 Cr to pay salaries!"

On Saturday too, Mr Gandhi had accused Prime Minister Narendra Modi of "weakening" HAL to help his "suit-boot" friend.

"HAL does not have money to even pay salaries should not come as a surprise to anyone," Mr Gandhi said in a Facebook post in Hindi. Rafale had been taken away from HAL, and "now to complete the job, the suit-boot friend needs people who are in HAL. Without weakening HAL, this work cannot be done?" he had said.

NDTV has been sued for 10,000 crores by Anil Ambani's Reliance Group for its coverage of the Rafale deal.