COVID-19: Protesting staff at Mumbai's KEM Hospital have also highlighted disturbing images of body bags on stretchers in the corridors of the hospital.

Mumbai's KEM Hospital has been stretched to the limit because of the rising virus cases.

The death of a worker posted at a coronavirus ward in Mumbai's KEM hospital has sparked huge protests by medical staff and other employees outside the state-run facility. Hundreds of doctors, paramedics and others were seen protesting in masks and other protective gear on Tuesday.

The worker, a daily wager who had allegedly been denied leave though he had been unwell for four days, died on Sunday night. Whether he died of COVID-19 will be known only after his test results are out. But his body has been at the hospital mortuary since last night.

His family should be compensated with a job and financial help, the protesting employees have demanded.

But the doctors, nurses, attendants and Class 4 employees have united to draw attention to a frightening crisis of virus cases and bodies becoming difficult for hospitals to handle.

Disturbing images emerged from KEM hospital of body bags on stretchers in corridors even as the protests peaked outside. 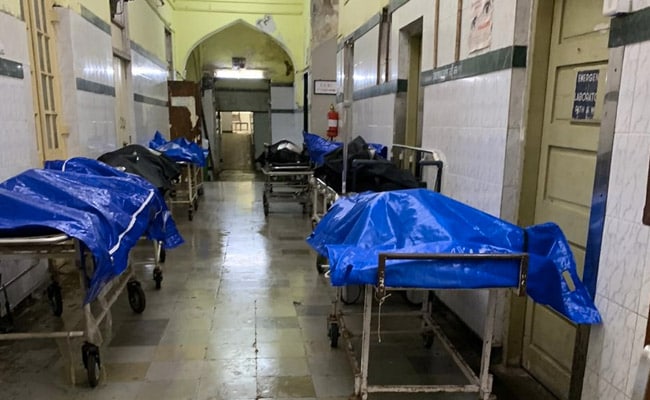 The bodies wrapped in blue plastic kept on stretchers in corridors of KEM hospital.

The bodies, wrapped in blue plastic, were allegedly moved from an overflowing ground-floor mortuary to the first floor of the hospital, along a corridor right next to a testing lab.

Like many others in Mumbai, the KEM Hospital, run by civic body BMC or Brihanmumbai Municipal Corporation, has been stretched to the limit because of rising virus cases and inadequate staff.

Doctors say there is a different protocol for wrapping bodies of COVID-19 patients and these are handled by Class 4 employees trained to do so.

The shortage of these workers has often forced doctors and paramedics to take over such tasks, which has fueled even more anger against hospital administrations.

Recently, after back-to-back videos of body bags in wards, the civic body put out guidelines making it a must to remove bodies from wards within 30 minutes and to dispose of them within two hours.

The BMC also ordered a temporary mobile mortuary at crematoriums to put a stop to the site of bodies piled up, waiting to be cremated.

Mumbai, the city worst-hit by the pandemic in India, has over 31,000 coronavirus cases and more than 1,000 deaths.