Arguments have been concluded in the case and the court will give its verdict at 3:30 pm today. 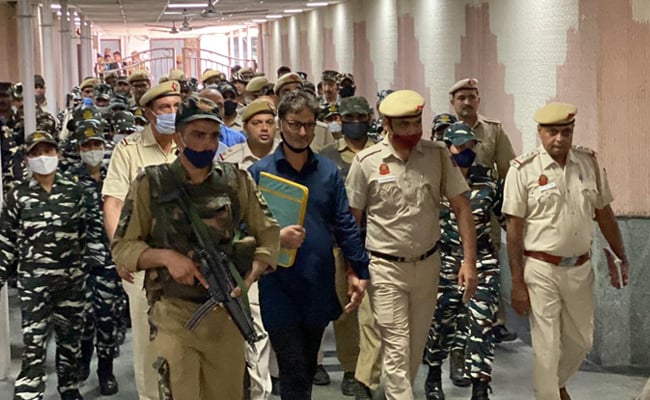 The defence has asked for life imprisonment instead of the death penalty.

The National Investigation Agency has demanded the death penalty for convicted Kashmiri separatist leader Yasin Malik, who had earlier pleaded guilty to all the charges including those under the stringent Unlawful Activities Prevention Act (UAPA), in a terror funding case. A Delhi court will today pronounce its verdict on the quantum of punishment in the case.

Arguments have been concluded in the case and the court will give its verdict at 3:30 pm today. The defence has asked for life imprisonment instead of the death penalty.

"I was arrested within 30 minutes of Burhan Wani's encounter. Atal Bihari Vajpayee allotted me a passport and India allowed me to make a statement because I was not a criminal," Yasin Malik said in court.

The judge said that no case was going on against Yasin Malik before this one.

The NIA has demanded the maximum punishment under Section 121 (Waging war against the government) which is the death penalty in this case. The minimum punishment is life imprisonment.

Malik also said that he has followed the principles of Mahatma Gandhi ever since he gave up arms in 1994. "I have been doing non-violent politics in Kashmir ever since," he said.

Claiming that he has worked with seven Prime Ministers, he challenged the Indian intelligence agencies to point out if has been involved in any terror activities or violence in the last 28 years. "I will retire from politics and also accept the death penalty," he added.

Parts of Srinagar witnessed a shutdown today ahead of today's verdict. Shops and other business establishments were shut in some parts of the city. However, the public transport and private vehicles were operating normally.

Security officials have been deployed in the sensitive areas of Srinagar to avoid any law-and-order situation, officials said.

The court had earlier said that Malik had set up an elaborate structure and mechanism across the world to raise funds for carrying out terrorist and other unlawful activities in Jammu and Kashmir in the name of the "freedom struggle".

Special judge Praveen Singh had on May 19 convicted Yasin Malik and had directed NIA authorities to assess his financial situation to determine the amount of fine likely to be imposed.

The charge sheet was also filed against Lashkar-e-Taiba founder Hafiz Saeed and Hizbul Mujahideen chief Syed Salahuddin, who have been declared proclaimed offenders in the case.