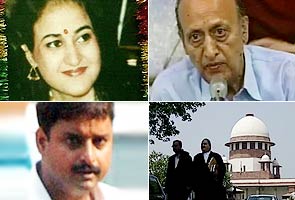 New Delhi: In the Priyadarshini Mattoo case, the Supreme Court has commuted the death sentence to life for Santosh Singh, the man accused of murdering the 23-year- old law student.

"We are shattered and dismayed," said  CL Mattoo, Priyadarshini's father, to NDTV. "We had expected better treatment from the courts."

Priyadarshini was strangled at her home in Vasant Kunj in Delhi in January 1996.  Santosh Singh was her classmate.

In October 2006, the Delhi High Court found Santosh Singh guilty of rape and murder and sentenced him to death.  Singh, who worked as a lawyer till he was imprisoned, appealed against that sentence.  "For a murder so grotesque and brutal, the convict deserves nothing less than the death penalty," the High Court had said.

Promoted
Listen to the latest songs, only on JioSaavn.com
That verdict reversed an earlier decision by a lower court in Delhi which had acquitted Singh.

The Supreme Court said today, "To our mind, certain things are in favour of appellant (Singh). We are converting the punishment of death sentence into the life imprisonment."

Work On To Set Up EV Charging Stations At 22,000 Petrol Pumps Across India: Centre