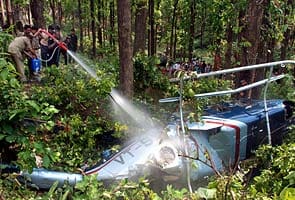 Dehradun: A private helicopter, hired along with two other choppers for the visit of BJP chief Nitin Gadkari and his family, crashed in Ladpur jungles here today barely hours after the group had got down at the airport, leaving the pilot and an engineer seriously injured.

Dehradun SSP G S Martolia told PTI that the chopper of SAR Aviation was flying to Sahastradhara helipad here from Jolly Grant Airport when it crashed apparently due to a technical fault as the weather was clear. The other two choppers had reached the helipad safely.

The Uttarakhand government has ordered an inquiry into the incident.

The chopper was part of three helicopters hired by the Uttarakhand government to take Gadkari and his family to Chardham yatra, official sources said, adding that the group which had come in the three choppers from Badrinath had got down at Jolly Grant Airport at 1 PM and after an hour the choppers had left for Sahastradhara helipad.

The pilot, Navin Vid, and engineer Navnil Kumar were admitted to government Coronation hospital in critical condition. Later, they were taken to a private hospital.

Eyewitnesses said the chopper had broken into pieces as a result of the crash and its tail had got entangled in a tree.

The debris of the chopper fell close to a residential area but there was no casualty on the ground, Martolia said.

"Vigyan Vihar residential area is only 10 feet away from the jungles. We believe that the pilot must have avoided this colony," he said.

The chopper was owned by Swajas company for the Chardham yatra season and was being operated by SAR Aviation.

"We are hearing this sad news at a time when we were about to close our chardham operations," said an official of the SAR Aviation.

Promoted
Listen to the latest songs, only on JioSaavn.com
Meanwhile, state civil aviation secretary P C Sharma said the government would conduct an inquiry into the crash.

"We are conducting the inquiry to ascertain exact cause of the mishap. It appeared that some technical snag must have caused the crash. But the main inquiry will be conducted by Directorate General of Civil Aviation," said Sharma.