India's Permanent Representative to the UN Ambassador Syed Akbaruddin had said last week that through the Coalition, India bring to the table a tangible demonstration of its willingness to work in partnerships. 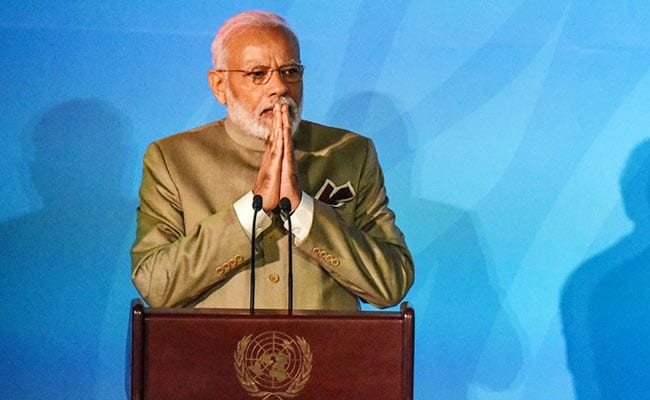 The Coalition aims to work towards a common goal of having infrastructure resilient to climate, disaster

Prime Minister Narendra Modi on Monday invited UN member states to join the Coalition for Disaster Resilient Infrastructure being launched by India, as he presented the country's "practical approach and roadmap" to mitigate climate change at the high-level UN Climate Action Summit in United Nations.

The summit is being hosted by Secretary General Antonio Guterres.

"The respect for nature, the judicious use of resources, reducing our needs and living within our means have all been important aspects of both our traditions and present day efforts," PM Modi told the Climate Action Summit as he began his engagements at the high-level 74th Session of the UN General Assembly.

"And therefore India today has come not just to talk about the seriousness of this issue, but to present a practical approach and a roadmap. We believe that an ounce of practice is worth more than a ton of preaching," he said.

In line with its leadership of the International Solar Alliance, India is launching a Coalition for Disaster Resilient Infrastructure, which will be a grouping of about 30 developed and developing nations.

"In order to make our infrastructure disaster resilient, India is launching a Coalition for Disaster Resilient Infrastructure. I invite member states to join this coalition," PM Modi said.

The Coalition aims to work towards a common goal of having infrastructure that is resilient to climate and disaster. For the Coalition, India is working with countries like the UK and small island states like Fiji and Maldives who face problems of climatic nature.

India's Permanent Representative to the UN Ambassador Syed Akbaruddin had said last week that through the Coalition, India bring to the table a tangible demonstration of its willingness to work in partnerships. India has the ability to convene people or countries that are not only geographically different but economically diverse as well, he added.

India, a member of the G-20, has many friends who are developing countries.

"So what we intend to do is to leverage that ability to work across the board and to bring to the table a group of countries who are ready to address issues of infrastructure. Whenever there is a cataclysmic climate event, infrastructure gets undermined and overwhelmed very quickly, and it becomes very difficult for developing countries or countries who do not have economic wherewithal to address these," he said.