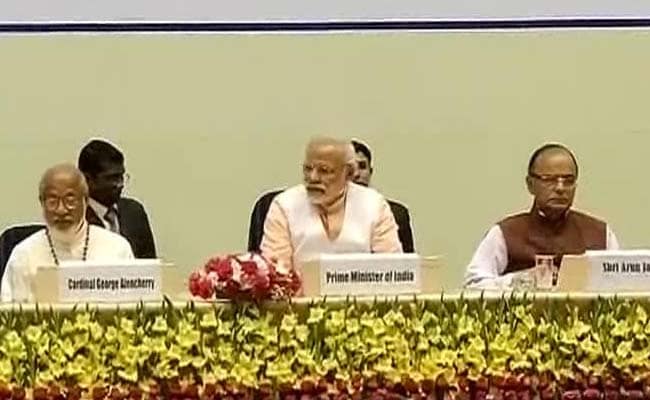 "I am delighted to participate in this function to celebrate the elevation to sainthood of two great saints of Kerala - Saint Kuriakose Elias Chavara and Saint Euphresia. The whole country is proud of their recognition. Their elevation was preceded by that of Saint Alphonsa, who also hailed from Kerala.

The life and deeds of Saint Chavara and Saint Euphresia are an inspiration not only to the Christian community, but to humanity as a whole. They are shining examples of dedication to God through selfless service for the betterment of mankind.

Saint Chavara was a man of prayer and also a social reformer. In an era when access to education was limited, he stressed that every church should have a school. He thus opened the doors of education to people from all sections of society.

Few outside Kerala know that he started a Sanskrit school, and also a printing press. His contribution towards women's empowerment was also noteworthy.

Saint Euphrasia was a mystic who dedicated her life to prayer and devotion to God.

Both these saints dedicated their life to God through service of fellow beings. The ancient Indian saying: welfare of the world is the way to moksha (salvation) - explains their life.

Spiritualism is rooted in India's heritage. Indian saints and Greek sages had intellectual and spiritual exchanges thousands of years back. India's openness to new ideas is manifest in the Rig Veda:  Let noble thoughts come to us from all sides. This philosophy has guided our intellectual discourse since time immemorial. Mother India gave birth to many religious and spiritual streams. Some of them have even travelled beyond Indian borders.

The tradition of welcoming, respecting and honouring all faiths is as old as India itself. As Swami Vivekananda said: We believe not only in universal toleration, but we accept all religions as true.

What Swami Vivekananda had said a century ago holds good and will, for ever, not only for this nation but also for this government or for that matter any government in India, run by any political party. This principle of equal respect and treatment for all faiths has been a part of India's ethos for thousands of years. And that is how it became integral to the Constitution of India. Our Constitution did not evolve in a vacuum. It has roots in the ancient cultural traditions of India.

Gurudev Rabindranath Tagore had inspired us to dream of a land where the mind is without fear and the head is held high. It is that heaven of freedom we are duty bound to create and preserve. We believe that there is truth in every religion.
Friends,

Let me now come to the issue which is central and critical for peace and harmony in the contemporary world. The world is increasingly witnessing division and hostility on religious lines. This has become a matter of global concern. In this context the ancient Indian plea of mutual respect for all faiths is now beginning to manifest in global discourse.

This long felt need and urge for mutually respectful relations led to the interfaith conference on 'Faith in Human Rights' at the Hague on tenth December, 2008. This was coincidentally also the 60th Anniversary of the Universal Declaration of Human Rights by the United Nations.

In their historic declaration, they defined what constitutes freedom of faith and how it is to be safeguarded.

We consider the freedom to have, to retain, and to adopt, a religion or belief, is a personal choice of a citizen.

The world is at cross roads which, if not crossed properly, can throw us back to the dark days of bigotry, fanaticism and bloodshed. This harmonious convergence among religions could not be achieved even when the world entered the third millennium. And now it has been. This shows that the rest of the world too is evolving along the lines of ancient India.

Speaking for India, and for my government, I declare that my government stands by every word of the above declaration. My government will ensure that there is complete freedom of faith and that everyone has the undeniable right to retain or adopt the religion of his or her choice without coercion or undue influence. My government will not allow any religious group, belonging to the majority or the minority, to incite hatred against others, overtly or covertly. Mine will be a government that gives equal respect to all religions.

India is the land of Buddha and Gandhi. Equal respect for all religions must be in the DNA of every Indian. We cannot accept violence against any religion on any pretext and I strongly condemn such violence. My government will act strongly in this regard.

With this commitment, I appeal to all religious groups to act with restraint, mutual respect, and tolerance in the true spirit of this ancient nation which is manifest in our Constitution and is in line with the Hague Declaration.

I have a vision of a Modern India. I have embarked on a huge mission to convert that vision into reality. My mantra is Development.

In simple terms it means food on every table, every child in school, a job for everybody and a house with toilet and electricity for every family. This will make India proud. We can achieve this through unity. Unity strengthens us. Division weakens us. I sincerely request all Indians, and all of you present here to support me in this huge task.

Let the elevation to sainthood of Saint Chavara and Saint Euphrasia, and their noble deeds inspire us:

Promoted
Listen to the latest songs, only on JioSaavn.com
-to maximize our inner strength
-to use that strength for transforming society through selfless service
-to fulfil our collective vision of a developed and modern India.

Over 58,000 Vacancies In Kendriya Vidyalayas, Other Central Institutes: Centre