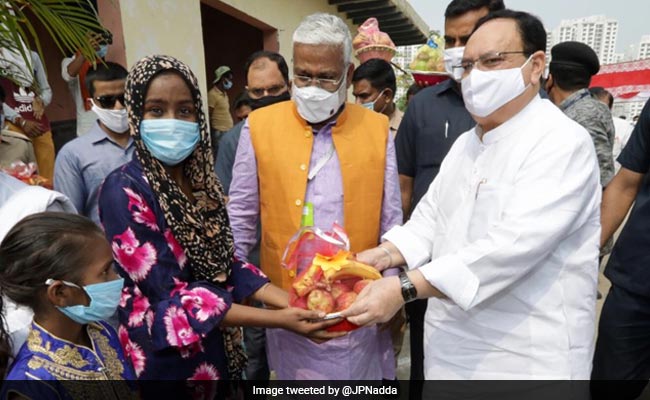 Prime Minister Narendra Modi has changed the culture of politics in the country since 2014, BJP chief JP Nadda said at the launch of the Seva Saptah, a week-long party campaign to mark the 70th birthday of the PM on September 17. "Friends, if we look at the politics of India post 2014, PM Modi not only became the prime minister but also changed raajneeti ki sanskriti (culture of politics) in the country," the BJP president said, in a veiled attack on the opposition. "The people have also realised the difference," Mr Nadda told a gathering of leaders and party workers in Gautam Buddh Nagar on the outskirts of Delhi.

"How did this happen? Before 2014, politicians would come, deliver speeches and make promises but would not keep them. PM Modi has changed that now. If we are elected representatives, we will work and serve the people and then go to them with our report card - this is how we work now," Mr Nadda said.

Without naming any political party or politician, Mr Nadda said, earlier in politics there was mewa or dry fruits instead of seva or service. "Now with PM Modi at the helm, we believe there is just seva and we work for the last man standing in the queue, the poor, the harassed, the deprived and the Dalits by bringing them into the mainstream," the BJP chief said.

Citing PM Modi's life as an example of service to others, Mr Nadda said, as part of Seva Saptah the BJP workers will organise cleanliness drive and blood donation camps across the country. "Since PM Modi is turning 70, we have decided to work at 70 spots in every district for cleanliness and distribution of fruits. We will visit hospitals, there will be special focus on plasma donation," he said. "We also have a target of providing at least 70 divyang (disabled) people with whatever equipment they require in each district. There will also be 70 virtual rallies," Mr Nadda said.

During his speech, Mr Nadda highlighted the number of beneficiaries under the Centre's scheme for LPG connection and Jandhan bank accounts, among others. He said amid the COVID-19 pandemic, the Centre also announced ration subsidies that have helped 80 crore people. "When we were opening Jandhan accounts, some people were mocking the move. Now, look how the beneficiaries are getting money, during the pandemic, into their accounts doing away with delays," he said.