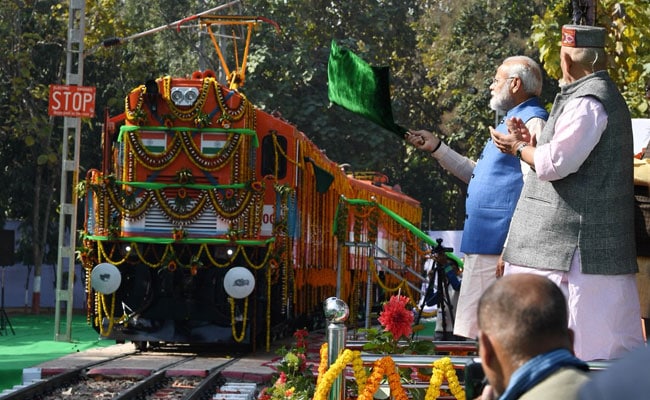 Prime Minister Narendra Modi was in his constituency, Varanasi, today to flag off the world's first diesel to electric locomotive. The project was completed by the Diesel Locomotives Works in record time. PM Modi took keen interest and went around the factory and inspected the engine from inside.

The conversion of the diesel locomotive into an electronic one was a landmark achievement of the Indian Railways, as part of its efforts to completely electrify the broad gauge network in the country.

The high profile project of the Railways was part of its Mission 100 per cent electrification and de-carbonization agenda. The work on the project began in December 2017 and from conceptualizing to building the electric locomotive was carried out in just 69 days, said a Railways official.

Congratulations to our engineers on making world's first Diesel to Electric Locomotive Engine at DLW, Varanasi, UP. The 10K HP locomotive flagged off by PM @narendramodi will boost make in India.

After the inauguration, PM Modi interacted with the beneficiaries of the Pradhan Mantri Jan Arogya Yojana - Ayushman Bharat at the Banaras Hindu University. He was accompanied by Uttar Pradesh Governor Ram Naik and Chief Minister Yogi Adityanath.

Later in the day, the PM Modi inaugurated the newly constructed Madan Mohan Malviya Cancer Centre of the Banaras Hindu University. The hospital aims to provide affordable cancer care to patients in Uttar Pradesh and neighbouring Jharkhand, Bihar, Uttarakhand and even Nepal. He is also scheduled to inaugurate Homi Bhabha Cancer Hospital in Lehartara.

With the inauguration of the two cancer hospitals, Varanasi is set to become an important centre for quality treatment of the disease. The Prime Minister will also lay the foundation stone of several projects worth several hundred crores in Uttar Pradesh.

PM Modi also visited the Sant Ravidas Temple and participated in the birth anniversary celebrations of the poet and philosopher.