"I Appeal To Youth...": PM Says As Protests Over Citizenship Bill Grow

Violence had scarred parts of the country since the citizenship law - meant to facilitate grant of citizenship to non-Muslim refugees from Pakistan, Afghanistan and Bangladesh - was passed 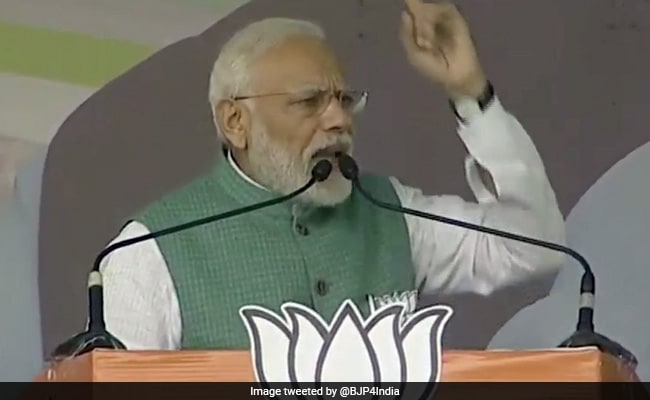 Prime Minister Narendra Modi has urged college and university students protesting the Citizenship (Amendment) Act, or CAA, to do so in a "democratic manner". Addressing an election rally in Jharkhand's Barahat this afternoon, the Prime Minister asked students to bring forth ideas for discussions with the government. PM Modi's comments come as wave after wave of student-led protests consume the country, and two days after a peaceful protest march by Jamia Millia Islamia students ended in a pitched battle between a violent mob and Delhi Police, who have been accused of using excessive force on students.

"The Indian Constitution is our only holy book. I appeal to the youth in colleges to debate our policies, protest democratically. We will listen to you. But some political parties and urban Naxals are firing from your shoulder," PM Modi said.

"The Congress is spreading lies, creating an atmosphere of fear for Muslims over the Citizenship Act. I give my assurances no citizen in the country will be affected by the law," the Prime Minister said, making a second appeal for peace in as many days as protests rage over a law criticised as discriminatory on the grounds of religion.

Home Minister Amit Shah has also appealed to students, asking them to "study" the new law.

The fire-fighting attempts by the two senior-most leaders in the ruling BJP come amid furious protests against the brutal crackdown on students at Jamia Millia Islamia and Aligarh Muslim University - both within the space of a few hours on Sunday night.

Agitations and violence have been reported from Assam and the North East. Student-led protests have also broken out in Tamil Nadu, Kerala, Karnataka and Maharashtra, Uttar Pradesh, Bihar, Hyderabad and Gujarat.

Hours after the Prime Minister's rally in Jharkhand, fresh violence broke out in east Delhi's Seelampur where a mob clashed with police; simultaneously, though, students from Jamia Millia mounted a protest of their own, which was peaceful.

On Monday, students at Mumbai's Tata Institute of Social Sciences told NDTV: "It is shameful on part of Home Minister Amit Shah and Delhi Police and police elsewhere. We are not going to shut up now".

Fired up by the students' protests, opposition parties have also spoken out - against the citizenship law and in support of peaceful protest movements.

Congress chief Sonia Gandhi led a multi-party delegation to meet President Ram Nath Kovind this evening and, earlier today, South superstar-politician Kamal Haasan said attacks on students were a blow on freedom of expression given by democracy and has left that institution in a "dangerous ICU".