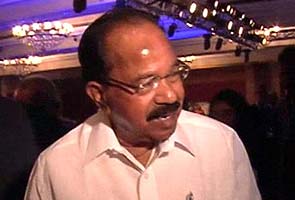 New Delhi: Oil Minister M Veerappa Moily today reiterated that the move last week to hold back a proposed hike in the price of non-subsidised cooking gas was taken not by the government but by oil marketing companies. The minister was at pains to explain that with an election code of conduct in place, the government could not take such decisions.

The UPA government was slammed by the opposition after the decision to hike price of non-subsidised LPG cylinders by Rs. 26.50 each was withdrawn within hours on Thursday last; the BJP said the rollback was done with an eye on Himachal Pradesh which voted yesterday for a new state government.

The holding back of the hike came amid reports that the UPA government is now facing pressure to review its larger LPG decision to raise the cap on the number of subsidised cylinders allowed for every household from the current six to nine. That pressure, say sources, comes from within the Congress, which leads the ruling UPA coalition. The party has its eye on elections - Himachal Pradesh which just voted and Gujarat, which votes in December, are both states the party would like to wrest back from the BJP.

Mr Moily, who took charge as Oil Minister only last week, had said on Friday, "Yes, there is pressure... Even the All India Congress Committee spokesperson said there should be increase in cap... Many political parties have said, many states have also said, like J&K, that there is a logistical problem...This is a matter, many of the oil agencies will have to consider."

Mr Moily, however, added that it was up to the oil marketing companies to decide on prices. He said it was all about deregulation and giving more independence to the oil marketing companies. "That's for the companies to do. Not my ministry's decision. They say there are certain administrative problems and administrative expediency which made them make this decision (hold back the price hike)," Mr Moily said in Bangalore.

Yesterday, at a mega rally organised by the Congress at New Delhi's Ramlila ground to counter, among other things, the attacks the Manmohan Singh government has faced on its attempt to push tough reform measures to invigorate the economy, Congress president Sonia Gandhi sent out an unequivocal message that the party backed the government it leads to the hilt on its reform measures. She talked about the September decision on fuel subsidy -and said, "The problem is that the oil prices have quadrupled in the international market and we import 80 percent of our requirements."

The Manmohan Singh government had, in September, announced, as part of its first big reforms push in months, that it was limiting the use of subsidised LPG cylinders at six a year for every household. For anything beyond that the consumer would have to buy cylinders at market or non-subsidised rates.

Within days of the UPA biting the subsidy bullet, Mamata Banerjee's Trinamool Congress exited the government, plunging it into a minority. Parties like the Samajwadi Party and the Bahujan Samaj Party, which prop the UPA government with external support have also said they are unhappy with the LPG decision. Allies DMK and even Sharad Pawar's NCP, which supports tough reforms-oriented decisions, have suggested a review of the LPG move.

The Congress had then asked its state governments to allow an additional three subsidised cylinders to below-poverty-line households.
Comments
Veerappa Moily