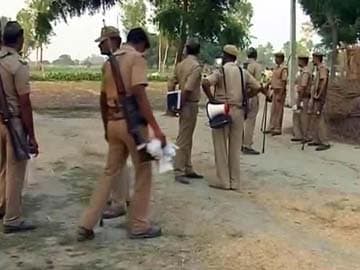 Badaun, UP: Pressure mounted on the Akhilesh Yadav government in Uttar Pradesh over the gang-rape and murder of two minor girls in Badaun, with politicians and human rights agencies blaming the government for the poor law and order situation in the state on Monday.

In Lucknow, workers of the Bharatiya Janata Party women's wing held a march and surrounded the chief minister's office to protest against the rising incidents of violence against women in the state.

The protestors assembled at the BJP office in front of the state assembly, and marched towards Mr Yadav's office.

Mr Paswan, the Union minister for consumer affairs, food and public distribution, lashed out at the Akhilesh Yadav government for not doing enough in the aftermath of the crime. He questioned the decision of the chief minister to stay away from the village.

In New Delhi, Women and Child Development Minister Maneka Gandhi described the incident as a "terrible" case and said the Centre was viewing it very seriously.

"It is a terrible case and symptomatic of what is happening in the country," Ms Gandhi said.

Asked if she would also visit the families, like other politicians, the minister said, "I will not go there. I would use that time to put in place an institution to make sure that such incidents do not recur."

The two girls, aged 14 and 15 years, were abducted, gang-raped and murdered on May 27 when they went to relieve themselves in a field. Their bodies were later found hanging from a tree.

Maneka Gandhi also questioned the need for a CBI probe into the incident as "it is an open and shut case".

"Men commit rape and molestation as they can get away with it," she added.

The minister also announced setting up special centres for rape victims in each district of the country to give them protection, medical treatment and legal help.

The project, which will approximately cost Rs 500 crore, would be formed by the end of this year, she added.

Meanwhile, the Union home ministry, asked the state government why the SC/ST Act was not slapped against the culprits.

"The law is there. It is to protect the SCs and STs from atrocities. It was a clear case of atrocity on a weaker section of the society. We do not know why the state government has not slapped it (clauses) against the accused," Minister of State for Home Kiren Rijiju said.

Meanwhile, the United Nations also condemned the gang-rape and murder, calling for immediate action against the perpetrators and to address violence against women across India.

"There should be justice for the families of the two teenaged girls and for all the women and girls from lower caste communities, who are targeted and raped in rural India. Violence against women is not a women's issue, it's a human rights issue," Lise Grande, resident coordinator of the UN system in India, said in a statement.

Promoted
Listen to the latest songs, only on JioSaavn.com
The statement said the UN system in India stands united with people across the country to do what it takes to ensure that every woman and girl can live safely and with dignity.