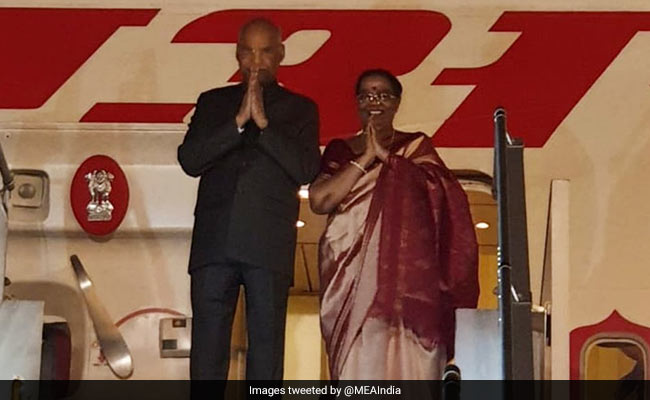 President Kovind is on a three-day visit to Iceland as part of his three-nation tour. (File photo)

President Ram Nath Kovind remembered the victims of the 9/11 terror attack on Wednesday and urged the international community to take a firm stand to stop the "inhuman forces" from destroying peace and harmony.

President Kovind is on a three-day visit to Iceland as part of his three-nation tour of Iceland, Switzerland and Slovenia during which he will brief the top leadership of these countries on India's "national concerns".

"We remember the victims of the 9/11 terror attack in the US. On the occasion, let us once again resolve not to allow these inhuman forces to destroy our peace and harmony," President Kovind said as the world observed the 18th anniversary of the 9/11 attack.

On Tuesday, President Kovind met with Iceland President Guoni Johannesson and the two leaders agreed that terrorism posed a grave threat to humanity and committed to work together to strengthen the global fight against terrorism.

"India has been a victim of cross border terrorism for several decades. I thanked President Johannesson for Iceland's support and solidarity in condemning Pulwama terror attack in India," President Kovind said.

Addressing the India-Iceland Business Forum in Reykjavik on Wednesday, President Kovind highlighted some of the key areas where the economic cooperation holds potential between the two countries.

President Kovind said Iceland's technological prowess and India's scientific skills could embrace each other to drive the Fourth Industrial Revolution and the machine-intelligence age.

"Our start-ups working on robotics, ecology and marine litter can be the potential anchors of our future engagement, in Iceland, India or in any other part of the world," he said.

"There is scope to enhance economic partnership in several areas - from trade, investment, services to research and innovation. Our bilateral trade figures are modest. But Indian market and Iceland's business strengths can add significant numbers to them," he said.

The President said Iceland could look at sourcing manufactured goods, fruits and vegetables, textiles, chemicals and engineering goods from India, while Indian pharma Industry can offer so much to the Nordic island nation.

"There is a lot that can happen between India and Iceland in the pharma, healthcare and biotech space. Finance, hospitality and tourism services also present significant opportunities," President Kovind said.

"Food industry is another potential area of collaboration. India is the second largest food producer in the world. We require technology and investment support to process our food and modern logistics chain to market it," he said.

Iceland is known for renewable energy - geothermal and hydroelectricity. There is scope for collaboration in this sector as well, he added.

The President also addressed the students and faculty members of the University of Iceland on the theme "India-Iceland for a Greener planet".

He said to make the Earth greener was a global challenge which required a global response.

"I have been told that Iceland loses 40 square kilometers of glacial cover annually. In India too, we are facing rapid melting of snow on the Himalayan peaks. This threatens not just our ecosystem but our complete way of life," President Kovind said.

"Even as we grow, we are on course to meet our commitments under the Paris Agreement," he said.