The President said the governors of all the states have abundant experience of public life and people of the country should get the maximum benefit out of it. 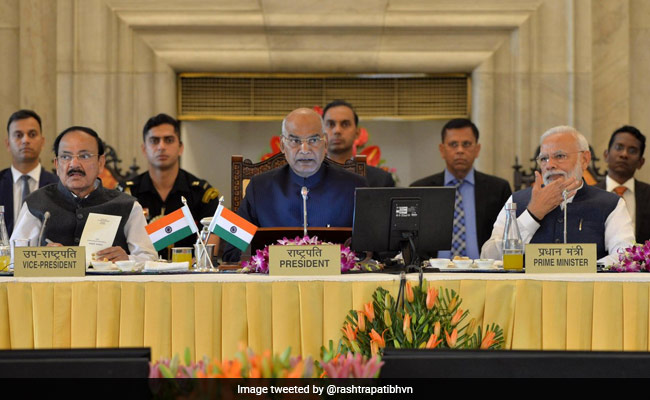 The role of Governors and Lt Governors has become important when the country's emphasis is on cooperative and competitive federalism for progress of the nation, President Ram Nath Kovind said on Saturday.

In his inaugural speech at the two-day-long Governor and Lt Governors' Conference in Delhi, the President said all the governors have abundant experience of public life and people of the country should get the maximum benefit out of it.

The role of governor is not limited to protection and preservation of the Constitution but they have a commitment to remain persistent in the service and welfare of the people of their states, President Kovind said, adding "ultimately, we all work for the public and we are also answerable to them".

Today the governors' role becomes even more important "when we are emphasising on cooperative federalism and healthy competitive federalism in the interest of the progress of the country", an official release issued quoted the President as saying.

The Centre has already started taking measures for competitive federalism by replacing the Planning Commission with NITI Ayog and also tabling in Parliament the recommendations of the 14th finance commission which envisages increase of the central tax revenue share from 32 per cent to 42 per cent.

Earlier, while inaugurating the 50th conference of governors and Lt governors of states and union territories, the President made a special mention about Lt Governors of Ladakh and Jammu and Kashmir -- RK Mathur and GC Murmu respectively. It was the first representation at the conference from the two newly carved out union territories, which came into existence on October 31 this year.

Emphasising on the importance of governors' role, President Kovind made an emphatic reference to the welfare of tribals and said their development and empowerment is linked to inclusive growth as well as to internal security of the country.

"Governors can give all the proper guidance by using the constitutional powers given to them, to improve the lives of these people, which have remained relatively behind in terms of development," he said.

The President said the agenda items for this year's conference has been done in accordance with the new work culture of ''New India'' so as to make the conference more useful and goal-oriented.

He said optimal use and conservation of water resources is one of the highest priorities of the country.

"We should make the Jal Shakti Abhiyan a mass movement like the Swachh Bharat Mission," President Kovind said.

The President said the goal of "our new education policy" is to make India a "knowledge super power".

In order to materialise this ambition, all institutions of higher education should make every effort to promote research and innovation, he said.

"Governors, as chancellors, also perform the responsibility of guardianship. Therefore, they are expected to give proper guidance to the future generations in their efforts to acquire skills and knowledge," he said.

During the conference, a sub-group of governors will deliberate on agenda items which include tribal issues, reforms in agriculture, Jal Jeevan mission, new education policy for higher education and governance for ''Ease of Living''.