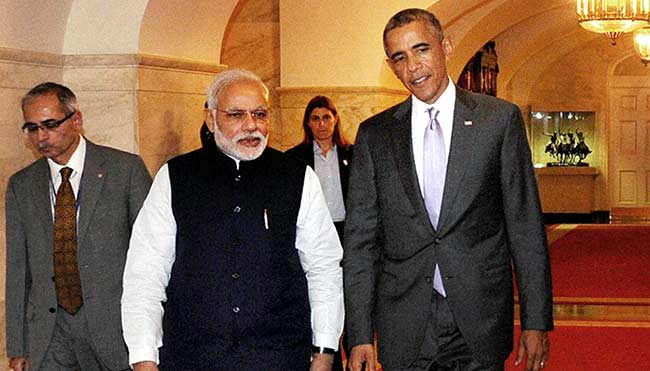 US President Obama welcomes PM Modi at the dinner hosted at the White House on September 29. (Press Trust of India)

Mr Modi had tweeted this evening:

This Republic Day, we hope to have a friend over...invited President Obama to be the 1st US President to grace the occasion as Chief Guest.

The White House said it will be the first visit by a US president as a Republic Day chief guest. It said President Obama would meet Pm Modi and Indian officials "to strengthen and expand the US-India strategic partnership." (Full Text of White House Statement)

Mr Modi met with President Obama in September at the White House  for talks on two consecutive days.

The PM traveled to Washington after addressing the United Nations in New York and starring in what was dubbed as "a rock star reception" at the Madison Square Garden venue in New York.

While the meetings at the White House did not yield big-ticket announcements, the leaders pledged to work closely together on security issues and to boost economic ties.

Mr Modi's warm reception came after he was denied a visa by the US in 2005 on account of alleged human rights violations in the 2002 riots which took place during his first term as Chief Minister of Gujarat.

Promoted
Listen to the latest songs, only on JioSaavn.com
Earlier this month, Mr Modi met with President Obama at an East Asia summit in Myanmar and a deal was struck there to allow a WTO trade deal that India had stalled over concerns that its food subsidies to the poor could face legal challenges. The President had praised Mr Modi as "a man of action".