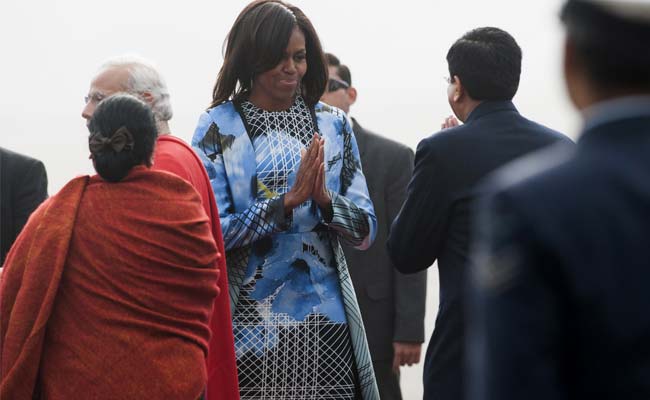 New Delhi: US First Lady Michelle Obama, known for her impeccable fashion sense, got a Pashmina shawl from Kashmir with an intricate embroidery as gift from President Pranab Mukherjee's wife Suvra Mukherjee.

President Mukherjee gifted her a specially-designed tea set with murals of the Rashtrapati Bhavan by famous Lucknow painter Sukumar Bose on it with Sunday's date inscribed on it.

US President Barack Obama received a painting by Rajasthan miniature artist Jay Kumar who with his prolific art work brought on to the canvas Bose's murals that decorate the ceiling of state corridor of the Rashtrapati Bhavan.

Mr Bose who served as curator of Rashtrapati Bhavan till 1970, used intricate calligraphy to weave in shlokas from Bhagvada Gita in his meandering semi-circular motifs decorating the ceiling.

Promoted
Listen to the latest songs, only on JioSaavn.com
Using solid colours such as red, black, gold and silver in varying shades, Bose used scenes from Ramayana in Indo-Persian style to decorate the State Corridor's arched ceiling.

The President also gave books on the over 85-year-old imposing building to Mr Obama.