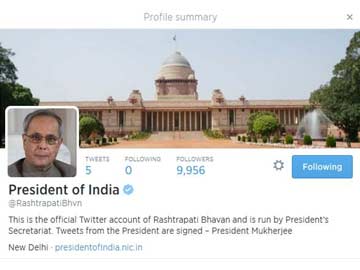 New Delhi: President Pranab Mukherjee today made his debut on social networking site Twitter and his account will have regular updates about his activities as well as news from the Rashtrapati Bhavan.

The account, which came into existence at 3 PM today and already has over 9,000 followers, is the first one being held by a President of the country ever since the micro-blogging site was launched in July 2006.

It was seen as an effort of the President's office to be in constant touch with the public.

The Prime Minister's office (PMO) has also welcomed the President on the micro-blogging site. "Welcoming @RashtrapatiBhvn to Twitter! Will be a wonderful medium for the people to connect with the President & his office," said a tweet from PMO's twitter handle.

Mr Mukherjee was the first President to make available the day-to-day activities of the Rashtrapati Bhavan on Facebook.

Promoted
Listen to the latest songs, only on JioSaavn.com
The Twitter account had the picture of the President with winners of national awards, Shilp Guru Awards and Sant Kabir Awards for craftspersons and weavers.