Presence Of ISIS, Al Qaeda In Parts Of Yemen Needs To Be Addressed: India

A Saudi-led coalition has been battling the Houthis since March 2015, months after the rebels seized Yemen's capital, Sanaa. 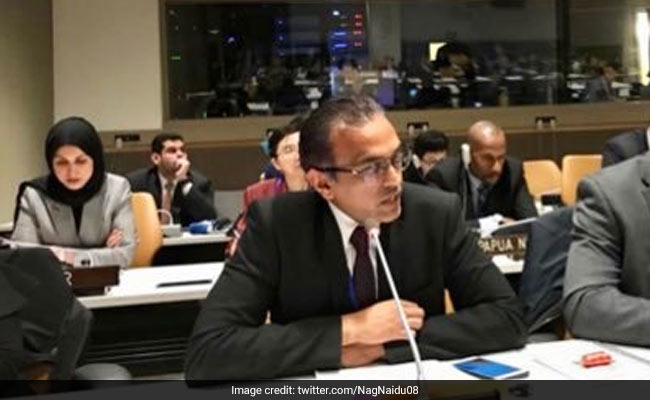 India has said the presence of terrorist elements like ISIS and Al Qaeda in parts of Yemen and their continued attacks on civilian population needs to be addressed, stressing that the international community must unite to fight the "dark forces of terror" globally and hold those who support and shelter such terror groups accountable.

Noting that the situation in Yemen is one of grave humanitarian proportions, India's Deputy Permanent Representative to the UN Ambassador K Nagaraj Naidu on Thursday emphasised at an Arria-formula meeting on Yemen that the solution to it is political, which can be achieved only through a broad and inclusive political process.

A Saudi-led coalition has been battling the Houthis since March 2015, months after the rebels seized Yemen's capital, Sanaa.

"While discussing the broader political conflict in Yemen, the presence of terrorist elements like ISIS and Al Qaeda in parts of the country and their continued attacks on civilian population needs to be addressed," Mr Naidu said.

He said terrorism is an "existential threat" to humanity and terrorists are the biggest violators of human rights.

"We must unite in fighting the dark forces of terror everywhere in the world and hold accountable those who support and shelter such terror groups," he said.

"We hope that all parties would eschew violence and fully co-operate with the Special Envoy in finalising the Joint Declaration at the earliest. To this end, we call for an implementation of the Stockholm Agreement of 2018 and the Riyadh Declaration of 2019," he said adding that ultimately, establishing peace and security through a political dialogue is the only way forward in Yemen.

The Stockholm agreement is a voluntary accord between the parties of the conflict in Yemen.

Its main component includes an agreement on the city of Hudaydah and the ports of Hudaydah, Salif and Ras Issa an executive mechanism on activating the prisoner exchange agreement.

Asserting that violence against women and girls deserves the strongest condemnation, Naidu said acts of sexual violence in armed conflict already constitutes an important criterion for designation of Security Council Sanctions on Yemen.

"The Council should also keep under constant review such crimes committed with impunity," he said.

He added that Yemeni women, girls and children have already paid a high price in the conflict, with many having lost loved ones and others continuing to be denied the basic opportunity to lead a life free of violence.

"This should end immediately," he said.

Mr Naidu said the impact of the ongoing conflict on the basic human rights, needs and dignity of ordinary Yemenis is very clear.

He noted that the estimated loss of life due to conflict, starvation and disease is more than 100,000 and around 3.65 million people have been forced to flee their homes, while 24.3 million people are in need of humanitarian assistance.

Malnutrition among children is hitting the highest levels since the conflict started, leaving at least 98,000 children under the age of 5 at the risk of dying.

"These numbers not only underscore the enormity of the crisis and the consequent human suffering but also point to the fact that Yemen''s catastrophe is man-made," he said.

Naidu stressed that protection of civilians and access to humanitarian aid are fundamental and parties to the conflict should comply with their obligations under relevant international law.

India has provided food and medical aid to Yemen in the past and thousands of Yemeni nationals have availed of medical treatment in India over the past few years.

Meanwhile Chairperson of the UN Group of Eminent International and Regional Experts on Yemen Kamel Jendoubi said in a closed session of the Security Council that "civilians in Yemen are not starving, they are being starved by the parties to the conflict."

Figures released on Tuesday from the UN humanitarian office, OCHA, suggest that more than 230,000 Yemenis have died due to the war, the majority - some 131,000 - through indirect causes such as lack of food, health services and infrastructure.

Over 3,000 children have been killed, and 1,500 civilian casualties have been reported in the first nine months of this year.