Read inOther Languages
This Article is From Feb 14, 2020

Prakash Javadekar's attack on Arvind Kejriwal, calling him a "terrorist" was broadcast by all national news networks just 10 days ago. 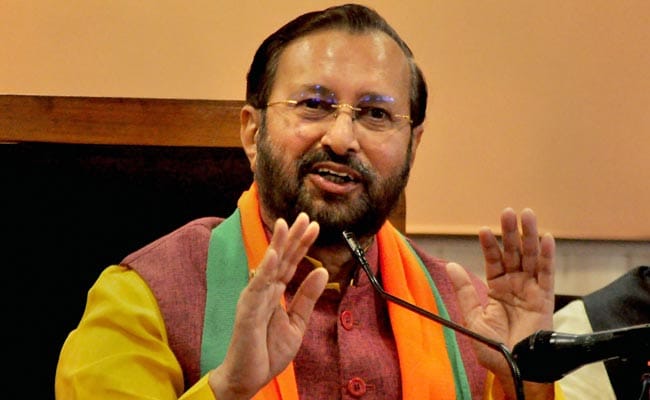 Prakash Javadekar's BJP was decimated in the Delhi elections.

Union Minister Prakash Javadekar on Friday denied that he had ever called Delhi Chief Minister Arvind Kejriwal a "terrorist", flat-out refuting his statement beamed on national television just 10 days ago.

"I have never done such a thing (calling Arvind Kejriwal a terrorist)... Secondly, the main outcome of Delhi election results is the Congress lost completely," the Union Minister of Environment, Forest and Climate Change was quoted as saying at a news conference in Pune by news agency ANI.

The statement was remarkably contradictory to the BJP leader's statement before the Delhi election, when, doubling down on an egregious accusation by a controversial parliamentarian from his party Parvesh Verma, he said, "You are a terrorist, there is plenty of proof."

The statement was broadcast by all national news networks including NDTV. Watch the video here:

"There is a reason voters of Delhi have turned away from Arvind Kejriwal. Kejriwal makes an innocent face and asks - 'am I a terrorist?' -- You are a terrorist, there is plenty of proof. You had yourself said you are an anarchist; there is not much difference between an anarchist and terrorist," Mr Javadekar said.

BJP MP Parvesh Verma was the first to use the term for the Delhi Chief Minister on January 25, on the campaign trail. He had implied that if Mr Kejriwal returned to power, then "Shaheen Bagh-type" of people will take over the streets. Shaheen Bagh in south Delhi is among the most prominent sites of protests against the citizenship law CAA that critics say discriminates against Muslims.

Just a day after the elections, re-elected BJP MLA OP Sharma repeated the attack on Mr Kejriwal, saying "Arvind Kejriwal is a corrupt man. He sympathises with terrorists, plays the role of the Pakistan Army's spokesman, raises questions on the Indian Army and supports the "Tukde-Tukde" gang. Indeed, terrorist is the appropriate term for him."

Leaders from the BJP have been widely condemned for a sharp dive in rhetoric before the election, ranging from communally charged slogans calling for "shooting the traitors" to the attack on the Delhi Chief Minister.

The party was pummelled in the election, scoring just eight of 70 seats in Delhi, while Mr Kejriwal's Aam Aadmi Party won the other 62.