"A Maharaj-ji told me to strengthen my saadhana (prayers) that bad times are upon us and the opposition is up to something, they are using some 'marak shakti' against BJP, to harm the BJP," Pragya Thakur said. 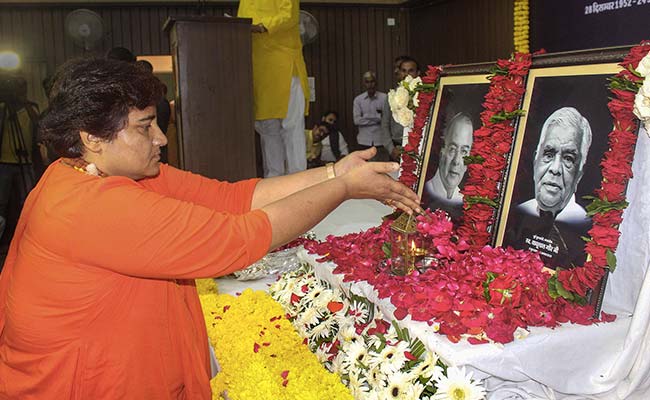 BJP MP Pragya Thakur has once again drawn attention with a controversial comment accusing rival parties of using supernatural forces against the ruling party. That, she alleges, is the reason why the BJP has lost top leaders in quick succession.

"When I was contesting the Lok Sabha polls, a Maharaj-ji told me to strengthen my saadhana (prayers) that bad times are upon us and the opposition is up to something, they are using some 'marak shakti' against BJP, to harm the BJP. I forgot what he said, but now when I see our strongest, ablest leaders leaving us, I am forced to think, wasn't Maharaj-ji right? You will also be targeted, so be careful," Pragya Thakur said, addressing a memorial for former Madhya Pradesh chief minister Babulal Gaur, who died last week, and former Union Minister Arun Jaitley, who died on Saturday.

"Our leaders are leaving us before time. You can believe it or choose not to. But the truth can't change," said the saffron-wearing self-styled Sadhvi, who won her first-ever national election earlier this year to enter parliament.

Ms Thakur made the statements at the condolence meeting where senior BJP leaders, including party's national general secretary Kailash Vijayvargiya and Leader of Opposition in MP Vidhan Sabha Gopal Bhargava were present.

Steering clear of her statements, Leader of Opposition Gopal Bhargava said, "Everyone has his or her own viewpoint. I can talk about myself and not anyone else."

Criticising her statement, Madhya Pradesh Cabinet Minister and senior Congress leader Digvijaya Singh's son Jaivardhan Singh said, "It's very unfortunate that a member of parliament has made such a statement. We knew Arun Jaitley ji, Sushma Swaraj ji, Babulal Gaur sahab - all very senior leaders, very well respected and to blame that opposition is doing some black magic is very unfortunate, she must take back her words.

Pragya Thakur, 49, is an accused in the 2008 Malegaon blasts. She has been a firm fixture in the headlines when it has come to unfiltered comments during her Lok Sabha campaign and after her election.