Rajnath Singh was speaking to reporters on board the aircraft carrier INS Vikramaditya which is currently sailing along India's western coastline. 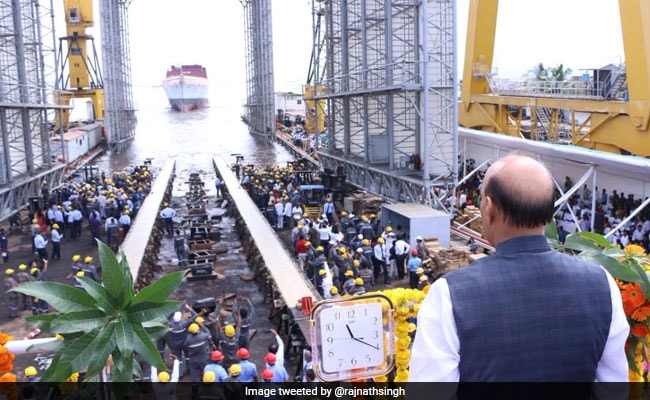 Aboard The INS Vikramaditya:

The threat of terror incidents along the Indian coastline remains and a neighbouring country is involved in "nefarious" actions to destabilise India, Union Defence Minister Rajnath Singh said on Sunday.

Rajnath Singh was speaking to reporters onboard the aircraft carrier INS Vikramaditya which is currently sailing along India's western coastline.

Asked about terror threats along the country's coastline, the defence minister said, "Any country in the world should have adequate security for itself. We cannot rule out any possibilities (of terror threats)."

"When the question of our neighbouring country comes, you know very well that to destabilise and to break India up, it keeps taking nefarious actions (napak har katein)," Rajnath Singh said in an apparent reference to Pakistan.

During his overnight stay on the INS Vikramaditya, Rajnath Singh witnessed various military exercises involving submarines, frigates, and the carrier.

"I can say this with complete belief that our Indian Navy has a solid and attentive presence here for maritime security. There is not an iota of doubt," Rajnath Singh said, adding that a Mumbai-like incident cannot be allowed to recur.

"We can not forget what happened on 26.11.2008 (the Mumbai attack). If some mistake has happened once, it must not be repeated again at any cost. Therefore, our Indian Navy and Coast Guard always remain vigilant," he said.

On the army chief's statement that terrorists have again come into play in Pulwama, Rajnath Singh said, "No one needs to tell what will happen to the terrorists who have come into existence."

Not only in India, the whole world knows what will happen to terrorists, but the defence minister also said.

Rajnath Singh, after a yoga session on the aircraft carrier early Sunday morning, said yoga has been accepted not only in India but across the world.

"It has got international recognition, and the credit goes to Prime Minister Narendra Modi," he said.

"He presented this resolution (on Yoga) at the United Nations and it received the support of 177 countries. In almost all countries, there is a substantial population, which practices yoga," the defence minister said.