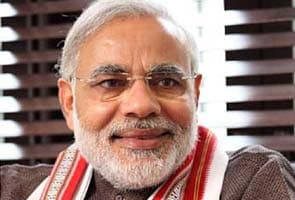 New Delhi: Nearly three-quarters of Indian business leaders believe the government has mismanaged the economy and want Bharatiya Janata Party (BJP) leader Narendra Modi to lead the country after an election due by May next year, according to an opinion poll published on Friday.

With India's 80-year-old Prime Minister Manmohan Singh expected to step aside, only 7 per cent of 100 chief executive officers surveyed for the Economic Times/Nielsen poll backed the ruling Congress party's Rahul Gandhi for the premiership.

Mr Gandhi represents the fourth generation of the Nehru-Gandhi dynasty that has led Congress, and India, for much of the time since independence from Britain in 1947. His late father, grandmother and great-grandfather were all prime ministers.

But after a decade in power, Congress is widely expected to struggle at the polls, as the economy is growing at its slowest rate in a decade, and the rupee's plunge to record lows has evoked bad memories of an economic crisis in 1991.

"After a long policy drought, CEOs are impatient for strong leadership, intent, decisions and action. Modi they seem to think has more to show than Mr Gandhi on all these counts," the Economic Times said in its comments on the results of the poll.

The survey was conducted by Nielsen between August 1 and the beginning of September and covered the chief executive officers of companies worth more than 5 billion Indian rupees across different industries.

Neither Mr Modi nor Mr Gandhi have been formally named as candidates and neither has publicly said they want the job, but the coming election has often been framed as a presidential-style race between the two men.

Indian business has in the past applauded Mr Modi as an investor-friendly chief minister who has led Gujarat to double-digit economic growth.

And the results of the poll represent the strongest recorded vote of confidence yet from industry for Mr Modi, who is otherwise often seen as a polarising figure, due to his Hindu nationalist ideology and the deadly riots in Gujarat in 2002, when according to rights groups at least 2,000 Muslims were killed.

Mr Gandhi, 43, has focused more on reviving the Congress party's political fortunes and, along with his mother Sonia, he been a vocal supporter of welfare programmes for the millions of poor. Otherwise, he rarely speaks in public and has said little about how to boost India's economic growth.

His solitary appearance before captains of industry in January failed to ignite enthusiasm and his speech was criticised for being vague and rambling.

Regardless of who wins, an overwhelming majority of business leaders said they wanted a stable government after the election, though neither the BJP or the Congress is expected to win a clear majority.

Promoted
Listen to the latest songs, only on JioSaavn.com
The worry among investors is that a "third front" made up of regional parties with competing agendas may end up forming a fragile government that may not survive long.

Business leaders surveyed in the poll, however, thought that the economy has bottomed out with 42 per cent forecasting a slight uptick in growth from the 4.4 per cent reported in the last quarter to over 5 per cent this year and the next. That is still far below the level policy makers say is needed to create jobs for the millions of youth joining the workforce.
© Thomson Reuters 2013