The matter requires "proper analysis", the Election Commission said today. "It has three aspects -- law, media and the poll code 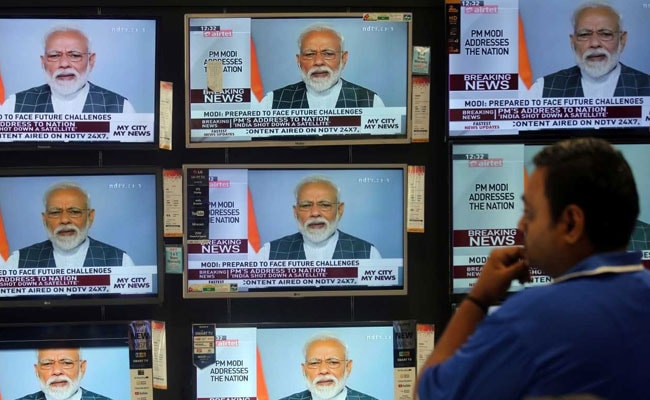 The Election Commission is expected to give its take today on whether Prime Minister Narendra Modi's public address on India's anti-satellite missile was a violation of the Model Code of Conduct as alleged by the opposition.

The matter requires "proper analysis", the Election Commission said on Thursday. "It has three aspects -- law, media and the poll code. We have collected information and we are going into the entirely to see whether there was violation. By tomorrow, there will be a decision," said Deputy Election commissioner Sandeep Saxena on Thursday.

The opposition parties raised a clamour after Wednesday's announcement of the anti-satellite missile test, Mission Shakti, claiming the Prime Minister was trying to gain political points from the achievements of scientists two weeks before the national elections.

This is why the announcement, they said, was a violation of the Model Code of Conduct -- unless the government sought permission for it beforehand.

Sources in the commission had initially said no permission was required for announcements linked to national security.

But after complaints from several parties, sources said officials have sought a transcript of the Prime Minister's speech from national broadcaster Doordarshan and a panel has been formed to examine it. The election watchdog today said it was studying the announcement.

According to the commission's model code of conduct - a series of do's and don'ts for political parties ahead of elections -- the party in power cannot use public money to publicise achievements.

"Issue of advertisement at the cost of public exchequer in the newspapers and other media and the misuse of official mass media during the election period for partisan coverage of political news and publicity regarding achievements with a view to furthering the prospects of the party in power shall be scrupulously avoided," it says.

The government has accused the opposition of using "clerical objections" and not caring about national security. "When the finger points to the moon, the idiot always points to the finger," Union minister Arun Jaitley said.

An anti-satellite weapon system or ASAT can severely cripple enemy communications and reconnaissance systems during war, and blind the entire military of an enemy force.