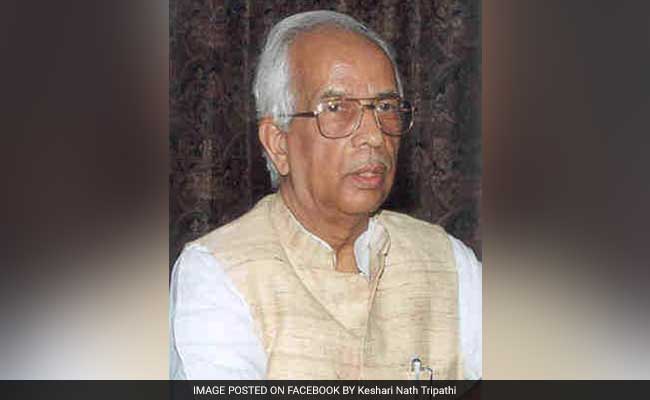 Mr Tripathi said tolerance is the "most important" factor in a democratic society.

West Bengal Governor K N Tripathi feels that every political party has the "constitutional and democratic right" to conduct their programmes, a remark that comes against the backdrop of the state government denying permission to the BJP to hold a ''rath yatra''.

Commenting on political violence in West Bengal, Mr Tripathi said violence should always be "deprecated and condemned" whether it is linked to political or criminal activities.

"In a democracy, political programmes are bound to take place. This is a part of constitutional and democratic right, and all parties should therefore obey the command of the Constitution and follow it in true spirit," Mr Tripathi told PTI in an interview.

He was asked whether it is right for a state government to stop political parties from taking out rallies and yatras. Mr Tripathi however refrained from naming any particular political party or government.

The former BJP veteran's comments came at a time when the TMC government's denial of permission to the saffron party to take out a ''rath yatra'' that would have criss-crossed the state's all 42 Lok Sabha seats ahead of the general elections has become a flashpoint between the two parties.

While appealing to the people of West Bengal to maintain peace and abide by law in the run up to the Lok Sabha polls, Mr Tripathi said, "Violence should always be deprecated and condemned whether it is connected with political activities or criminal activities."

Mr Tripathi insisted that tolerance was the "most important" factor in a democratic society, and that peace could be ensured if people had patience to listen to, appreciate and evaluate the views of others.

The state was rocked by a string of incidents of communal violence including the riots in Dhulagarh and Kalichowk in 2016, Basirhat in 2017 and in Asansol in 2018. Acknowledging that "there seems to be intolerance" in the country, Tripathi said he personally feels that all political parties should take steps to make people understand the importance of tolerance and patience so as to ensure a congenial atmosphere in society.

When asked about the war of words he had with Chief Minister Mamata Banerjee during the Basirhat riots, he said, "Every state has a duty to act impartially and maintain law and order as acting impartially engenders faith in the government."

A bitter war of words had broken out between Banerjee and Mr Tripathi during the Basirhat communal conflagration. Banerjee, while addressing media after her telephonic talk with Mr Tripathi, had accused him of insulting and threatening her.

She had gone to the extent of claiming that the governor was acting like a "BJP block president". On being asked whether the idea of recommending President's Rule ever crossed his mind during his gubernatorial stint in West Bengal since July 2014, he said he formed opinions on the basis of material available with him.

"And that opinion is communicated to the appropriate authorities. It has to be confidential," he said, in a terse reply. On the allegation by some TMC leaders that he has turned Raj Bhavan into BJP''s "back office", the thrice former speaker of Uttar Pradesh Assembly, said people come to meet him in exercise of their right to expression, they put forward their grievances, which are considered and necessary action taken.

Voicing concern over illegal infiltration from across the India-Bangladesh border, Mr Tripathi said it affected the country's security and needed to be stopped. "Illegal immigration continues, for whatever reason it does, and all effort should be made to stop it. It will be in national interest to stop it," he said.