Policemen Killed In Gadchiroli Blast May Have Ignored Rules: Official

Sixteen people, including 15 policemen, were killed Wednesday after Maoists blew up their vehicle by triggering an IED. 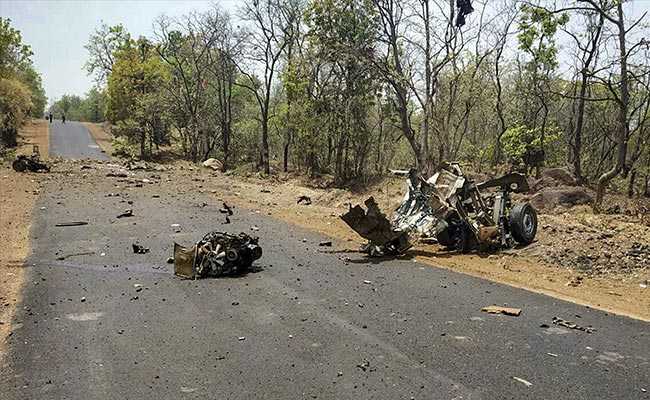 The police team that came under Maoist attack in Maharashtra's Gadchiroli district seems to have ignored standard operating procedures (SOPs) while planning their movement, an official said Thursday.

Sixteen people, including 15 policemen, were killed Wednesday after Maoists blew up their vehicle by triggering an IED.

The jawans killed were members of the Gadchiroli district's Quick Response Team (QRT). They were called in as reinforcement from Kurkheda after CRPF personnel were shifted out of Purada for election duty, the official said.

Maoist activities in the area under the jurisdiction of the Purada police station in north Gadchiroli had increased in the last few days, he said.

Presence of the CRPF personnel, who were stationed in the area, could have ensured better patrolling of the stretch where the attack took place, he said.

The Maoists had prior information of the movement of the QRT team. So they planted an IED beneath the road and targeted the private vehicle ferrying them, the official said.

In the early hours of Wednesday, there was an incident of arson in which 27 vehicles were torched by Maoists at Dadapur in jurisdiction of the Purada police station, he said, adding Maoists knew a police team would be sent to Purada after the arson.

It seems the police team did not follow the SOPs, he said, adding in such cases policemen should avoid using private vehicles and instead go on foot.

The police team should have sensed the danger and avoided taking a private vehicle in a hurry to reach the arson site, the official said.

Meanwhile, Chief Minister Devendra Fadnavis said in Gadchiroli the Maharashtra DGP himself is investigating the entire matter and will see if there was any lapse that led to the tragic incident.

After paying tributes to the victims, Mr Fadnavis told reporters, "Naxals are retaliating the massive action undertaken by the Gadchiroli police against them in the last two to three years."

"I am confident that the sacrifice made by the jawans will not go in vain... and appropriate action will be taken. I would not like to say much about it for now," he said.

Earlier, the chief minister paid floral tributes to the victims policemen at the Gadchiroli SP office ground, where their mortal remains were kept. He was accompanied by Union minister Hansraj Ahir, Maharashtra ministers Deepak Kesarkar, Ambareesh Atram and Chandrashekhar Bawankule.

Director General of Police Subodh Kumar Jaiswal had Wednesday said the attack was not a result of intelligence failure.

Terming it a "big loss" for the force, he had said the police "were ready to give a befitting reply to the Naxals".

"I cannot call this an intelligence failure... The Maharashtra police will take whatever action needed against such activities," the IPS officer said.