Police take man suspected to be Bitti Mohanty back to Kerala 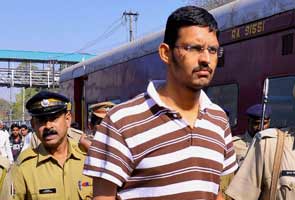 Jaipur: The Kerala police today flew a man it suspects to be Bitti Mohanty, a rape convict on the run for over six years, back to Kerala, from where he was arrested earlier this month and found to be allegedly living under a new identity.

The man, who insists he is Raghav Ranjan and not Bitti Mohanty, had been brought by a Kerala police team from Kannur to Alwar in Rajasthan two days ago. He was taken to Jaipur yesterday for investigations.

Another Kerala police team investigating in Odisha has said the man thought to be Bitti Mohanty forged his school and college certificates to assume Raghav Ranjan's identity.

After visiting the Kalinga Institute of Industrial Technology in Bhubaneswar, where Bitti Mohanty finished B.Tech in 2004, and Cuttack's Stewart School and Christ College yesterday, the police team's leader, Jose Joseph, said: "The B.Tech certificate in the name of Raghav Rajan is forged. A certificate with the same number was issued in the name of Bitti Mohanty."

At the Stewart School, principal Asha Das told the Press Trust of India: "We did not have any student by the name of Raghav Rajan. The index number and other details in Raghav Rajan's certificates had been issued to Bitti Mohanty."

The Kerala police said certificates obtained from Christ College in name of Raghav Rajan too were forged.

Bitti Mohanty was convicted in March 2006 for raping a 26-year-old German national in a hotel in Alwar, Rajasthan. On November 20, after spending seven months in jail, he was allowed to leave prison on parole on the plea that his mother in Odisha was unwell and wanted to meet him. He has been missing ever since.

Promoted
Listen to the latest songs, only on JioSaavn.com
Police say the man arrested in Kannur on March 8 this year is Bitti Mohanty, and that he had reinvented himself as Raghav Rajan, taught at a school in Andhra Pradesh, completed an MBA in Kerala and taken up a job in a bank.

The man was arrested after an anonymous letter warned his bosses at the bank that he was wanted in a rape case in Rajasthan.
Comments
Bitti Mohanty