The report is at variance with the state government's claim that the big cat named "Mahavir" died after killing a porcupine, the spine of which was found in its stomach during post-mortem. 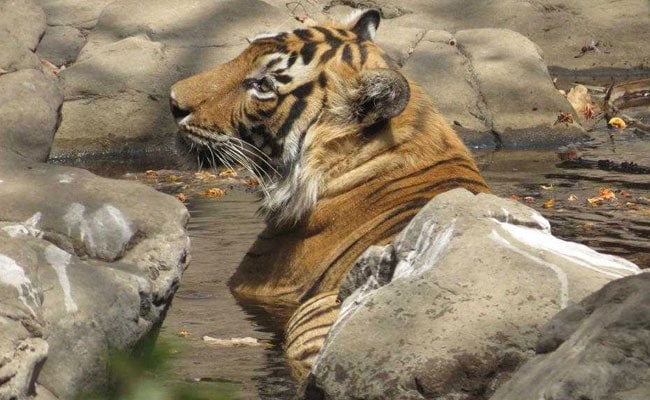 A translocated tiger, the carcass of which was found in an Odisha sanctuary last month, died after falling into a trap laid by poachers, two central government agencies dealing with wildlife have said.

This was stated by a joint inspection team of the National Tiger Conservation Authority (NTCA) and the Wildlife Institute of India (WII) in its report.

The report is at variance with the state government's claim that the big cat named "Mahavir" died after killing a porcupine, the spine of which was found in its stomach during post-mortem.

The report of the joint team of the NTCA and the WII said "Mahavir" had sustained deep wounds around its neck while trying to escape from a trap laid by poachers for catching wild boar.

The big cat died due to multi-organ failure as the wound had led to an infection, which, in turn, had led to sepsis, it added.

The three-year-old Royal Bengal Tiger was found dead in the core area under the Raigoda range on the Hindol-Narsinghpur border of the Satkosia Tiger Reserve (STR) on November 14.

A member of the WII involved in the investigation said, "The trap might have been set up to capture wild boar, so it cannot be called targeted poaching, but accidental."

Replying to a question, the WII official further said: "We need to take a serious lesson from this and formulate future strategies."

The joint investigation report also suggested that the STR authorities needed to implement more anti-poaching measures before other big cats were shifted there under the inter-state tiger translocation programme.

As part of the programme, six tigers are to be brought to Odisha from Madhya Pradesh. The state has already procured two of the big cats since June.

"Mahavir" was brought from the Kanha National Park in Madhya Pradesh on June 20 and kept inside an enclosure at Raigoda on June 21. After observing his behaviour, forest officials had released him into the wild of Satkosia on July 6. A radio collar was fitted to its neck to keep track of the animal's movement.

The other Royal Bengal Tiger -- a female named "Sundari" -- procured by Odisha has allegedly killed two people, prompting the state government to shift the animal to a special enclosure at the Rayagada area in Angul district.