Observing that Arvind Subramanian seems to have made a "hurried attempt to draw conclusions" about India's complex economy, the paper said he has used 17 high frequency indicators, but ignores the representation of ''services sector" and ''agriculture sector'' in the analysis. 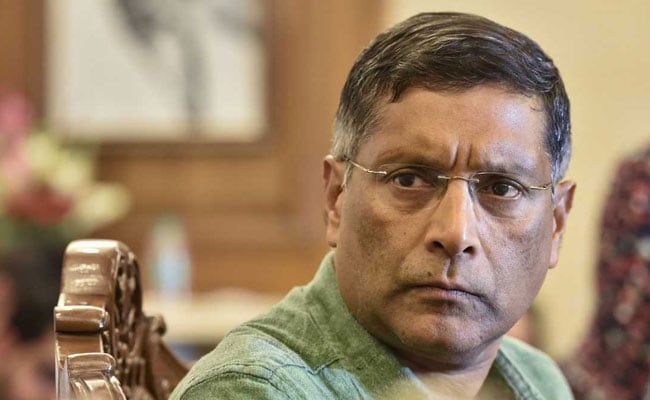 Arvind Subramanian was the CEA in the finance ministry for nearly four years from October 2014.

The Economic Advisory Council to the Prime Minister (EAC-PM) on Wednesday rejected the claims of former Chief Economic Adviser Arvind Subramanian regarding over-estimation of GDP growth after 2011, saying his analysis ignores data on services and agriculture and shows blind trust in a private firm CMIE.

In a paper released by EAC-PM, India's GDP estimation methodology stands at par with its global standing as a major and responsible economy. Primary contributors of the paper are economists Bibek Debroy, Rathin Roy, Surjit Bhalla, Charan Singh, Arvind Virmani.

Last week, the advisory body had said it would issue a point-to-point rebuttal of Mr Subramanian's research paper.

In a research paper, Mr Subramanian, who stepped down last year, said India's economic growth rate has been overestimated by around 2.5 percentage points between 2011-12 and 2016-17 due to a change in methodology for calculating GDP.

Mr Subramanian was the CEA in the finance ministry for nearly four years from October 2014.

Observing that Chief Economic Adviser (CEA) Subramanian seems to have made a "hurried attempt to draw conclusions" about India's complex economy and its evolution, the paper said he has used 17 high frequency indicators, but ignores the representation of ''services sector (60 per cent in GDP) and ''agriculture sector'' (18 per cent of GDP) in the analysis.

The paper notes that Mr Subramanian used 17 indicators to express his skepticism about the growth rates after 2011-12. Majority of the 17 indicators have been taken directly from the Centre for Monitoring Indian Economy (CMIE), a private agency that is not a primary source of information but collects it from different sources, it said.

"For anyone who reads Dr Subramanian's paper, it is evident that he trusts CMIE but distrusts CSO (Central Statistics Office)... This blind trust in a private agency (CMIE) and blind distrust in a government institution that has served India (CSO) appears unwarranted for a neutral academic," it said.

The paper further said the former CEA has overlooked the tax data.

The EAC-PM paper said Mr Subramanian chooses to overlook tax data arguing that "we do not use tax indicators because of the major changes in direct and indirect taxes in the post-2011 period which render the tax-to-GDP relationship different and unstable, and hence make the indicators unreliable proxies for GDP growth".

Unlike many indicators, it said tax data is not collected through surveys or by agencies through arcane techniques, these are hard numbers and should be an important indicator of growth.

"Further, there have been no major changes in tax laws until the end period in the author's analysis (March 31, 2017). GST was introduced on July 1, 2017. The author's logic of not using tax data appears to be a convenient argument meant to avoid inconvenient conclusions based on hard facts," it said.

The EAC-PM paper also noted that India's GDP estimation is by no means a perfect exercise.

"Is it better than before? Yes.

"Is the process to further improve it in place? Yes," it added.

It further said Mr Subramanian, in the capacity of CEA in the Ministry of Finance, has presided over the army of government economists and statisticians and is aware of the enormous magnitude and complexity of the exercise to compute GDP of the continent-size highly diverse emerging economy of India.

"To consider attempting to approximate GDP (gross domestic product) of such a country on the basis of some correlations and four variables using simplistic econometric techniques and challenging the existing edifice of data collection is not only demoralising to those dedicated personnel but also technically inappropriate," it added.

The government had earlier said the base year of the GDP series was revised from 2004-05 to 2011-12 and released on January 30, 2015, after adaptation of the sources and methods in line with the System of National Accounts 2008.