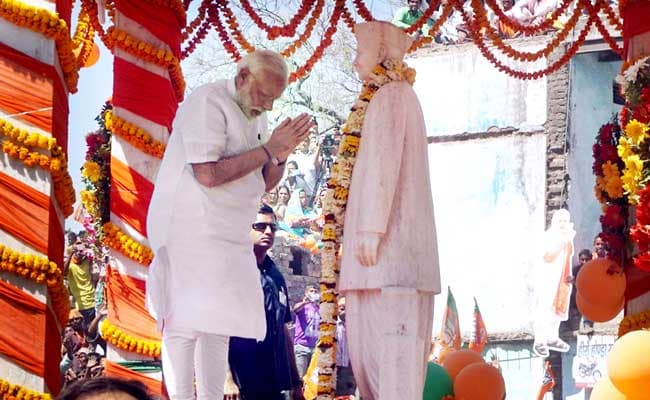 Varanasi: Prime Minister Narendra Modi wrapped up an intense campaign for the Uttar Pradesh elections today with a pitch for votes to farmers at a public rally in Rohaniya, about 200 km from Varanasi, his parliamentary constituency. For the last three days, PM Modi has been in Varanasi holding massive road shows as the BJP attempts to consolidate and secure a big win in eastern UP. This is the longest campaign by a Prime Minister in his constituency in any election.

The Rohaniya rally was the PM's 23rd in the UP assembly election; the BJP has projected no one for Chief Minister, seeking votes for PM Modi's development agenda.

Apart from PM Modi, BJP chief Amit Shah and more than 20 union ministers have been camped in Varanasi for the last week to campaign in eastern UP for the last two rounds of elections, in which a total 89 of UP's 403 constituencies vote. The sixth round of voting was held on Saturday. The seventh and final round is on Wednesday, when voting will be held in 40 seats, including the five assembly seats in Varanasi.

Campaigning not far from Varanasi in Jaunpur, UP Chief Minister Akhilesh Yadav said today, "PM Modi has been saying that the BJP has already won the elections  and that the last two phases are just a bonus. If that is the case, then why is PM Modi in Banaras for three days?"

Winning eastern UP, which has Varanasi at its heart, is crucial to the BJP's plan to come back to power in UP after 15 years, after reports that in the first few rounds of polling in western UP, the party could lose some ground because the Jats who powered its sweep of that region in the 2014 national election are upset this time over the notes ban and their demand for quota in government jobs and colleges not being met.

The Prime Minister's hectic programme on Monday, the last day for campaigning for the last round of the UP elections, was strategically designed. He first visited the Gadwaghat Ashram which is most revered by Yadavs. The ashram has over a crore followers and is said to have a powerful say in the political decision-making of the Yadav community, which Akhilesh Yadav's Samajwadi Party counts as a core support base.

From the ashram PM Modi went to Ramnagar to pay tribute to former Prime Minister Lal Bahadur Shastri, whose paternal home is in this part of Varanasi. He garlanded a statue of the former Prime Minister and spent some time at his home, from where as a young boy from a poor family, Lal Bahadur Shastri swam across the Ganga to go to school on the days that he did not have money for a boat ride.

The PM's visit was seen as another attempt by him to claim the legacy of a tall Congress leader. The BJP alleges that the Congress has in obsequious worship of the Nehru-Gandhi family, ignored its other great leaders like Sardar Patel, BR Ambedkar and Lal Bahadur Shastri.
Comments
PM Narednra ModiPM Modi in VaranasiUP Elections 2017India newsElection newsPM Modi-Lal Bahadur Shastri