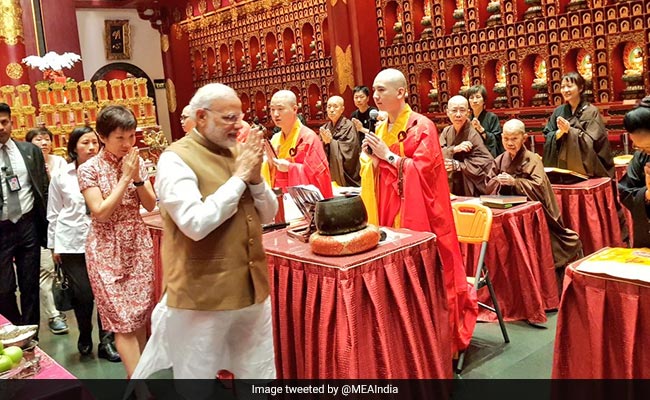 On his last day in Singapore, PM Modi visited a Hindu temple, a Buddhist temple, and a mosque

PM Modi, who was in Singapore on a three-day visit, offered prayers at the Sri Mariamman Temple, which is the oldest Hindu temple in the country. The priest of the temple gifted Prime Minister Modi a golden stole.

"Blessed to have prayed at the beautiful Sri Mariamman Temple in Singapore. This Temple illustrates the vibrant cultural connect between India and Singapore," PM Modi tweeted after offering prayers.

Blessed to have prayed at the beautiful Sri Mariamman Temple in Singapore. This Temple illustrates the vibrant cultural connect between India and Singapore. pic.twitter.com/gFqoAzgzLW

Built in 1827, the temple was constructed for worship by immigrants from Nagapatnam and Cuddalore districts of South India. The temple is dedicated to Goddess Mariamman, known for her power in curing illnesses and diseases.

The prime minister also visited Chulia mosque which was built by Chulia Muslim merchants from India's Coromandal Coast under the leadership of Anser Sahib. This is one of the earliest mosques in Singapore. The mosque was established in 1826. PM Modi was presented a green shawl at the mosque.

Visited the Chulia Mosque in Singapore. The Mosque is one of the oldest in the city. pic.twitter.com/WqUMBvrObq

Promoted
Listen to the latest songs, only on JioSaavn.com
The Buddha Tooth Relic Temple was built in 2007, but the temple's richly designed interiors and comprehensive exhibits on Buddhist art and history tell stories of culture over hundreds of years old.

Glimpses from the memorable visit to the Buddha Tooth Relic Temple and Museum. pic.twitter.com/EBf2yAuOwn

The temple gets its name from what the Buddhists regard as the left canine tooth of Buddha, which has been recovered from his funeral pyre in Kushinagar, Uttar Pradesh and displayed in its grounds.