"Fury Of COVID-19 Provides Context For Rebirth And Reform Of UN": PM Modi

Addressing the high-level segment of the UN Economic and Social Council (ECOSOC) session via video link, he said the 75th Anniversary of the founding of the UN is an opportunity to assess its role and relevance in today's world. 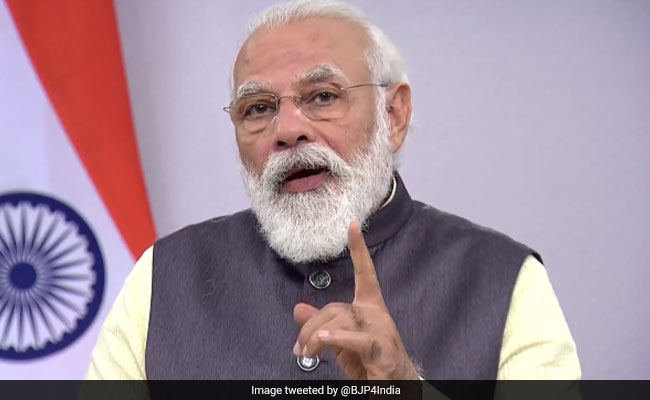 Prime Minister Narendra Modi on Friday said the fury of the COVID-19 pandemic provides the context for the "rebirth and reform" of the United Nations and called on nations to pledge to reform the global multilateral system to enhance its relevance and make it the basis of a new type of "human-centric globalisation."

Addressing the high-level segment of the UN Economic and Social Council (ECOSOC) session via video link, he said the 75th Anniversary of the founding of the UN is an opportunity to assess its role and relevance in today's world.

Noting that a lot has changed since its formation, PM Modi said the UN now brings together 193 member countries and along with its membership, the expectations from the organisation have also grown.

It was the Prime Minister's first address to the broader UN membership after India was overwhelmingly elected as non-permanent member of the powerful Security Council last month.

"India firmly believes that the path to achieve sustainable peace and prosperity is through multilateralism. As children of planet Earth, we must join hands to address our common challenges and achieve our common goals. "However, multilateralism needs to represent the reality of the contemporary world," PM Modi said.

Addressing the session 'Multilateralism after COVID-19: what kind of UN do we need at the 75th anniversary?'', he underscored that only "reformed multilateralism" with a reformed United Nations at its center can meet the aspirations of humanity.

"Today, while celebrating 75 years of the United Nations, let us pledge to reform the global multilateral system. To enhance its relevance, to improve its effectiveness, and to make it the basis of a new type of human-centric globalisation.

"The United Nations was originally born from the furies of the Second World War. Today, the fury of the pandemic provides the context for its rebirth and reform. Let us not lose this chance," he said.

Modi said at the High-Level session that India has been elected to the Security Council at this very important time.

"With our deep commitment to maintaining global harmony, to improving socio-economic equity, and to preserving nature's balance, India will play its role in full support of the UN agenda," the prime minister said.

PM Modi told said that as nations mark the 75th Anniversary of the founding of the United Nations, it is an occasion to recognise the UN's many contributions to human progress and also an opportunity to assess the UN's role and relevance in today's world and to shape a better future for it.

India was among the 50 founding members of the United Nations immediately after the Second World War but a lot has changed since then, he said adding that today the UN brings together 193 member countries.

"Along with its membership, the expectations from the organisation have also grown. At the same time multilateralism is facing many challenges today."

The High-Level Segment of ECOSOC comes as the COVID19 pandemic is ravaging the world and causing unprecedented health and economic challenges.

PM Modi said the COVID-19 pandemic has "severely tested" the resilience of all nations. "In India, we have tried to make the fight against the pandemic a people''s movement, by combining the efforts of Government and society."

He highlighted that the Indian government has given the highest priority to reach benefits to poor households and announced a package of more than USD 300 billion.

"It will bring the economy back on track, build modern infrastructure and put in place a technology-driven system. We have put forward a vision of ''Atmanirbhar Bharat'' a self-reliant and Resilient India, integrated with the global economy."

PM Modi had earlier delivered the keynote address virtually at the 70th anniversary of the ECOSOC in January 2016. India has had a long tradition of close association with ECOSOC, one of the six main organs of the United Nations. The inaugural Presidency of ECOSOC in 1946 was held by Sir Ramaswami Mudaliar of India.

"India is home to one-sixth of humanity. We are mindful of our weight and responsibility. We know that if India succeeds in achieving its development objectives, it will go a long way in achievement of global goals," PM Modi said.

"Our motto is ''Sabka Saath, Sabka Vikaas, Sabka Vishwas'' - meaning ''Together, for everyone''s growth, with everyone''s trust, he said.

PM Modi said in India's fight against COVID, the grass-roots health system is helping the country ensure one of the best recovery rates in the world.

"We are also on track to remove TB by 2025. Other developing countries can learn from the scale and success of India''s development programmes. And from the technologies and innovations we have deployed. It is this realisation that under-pins India's own development partnership with the global South."

"Be it earthquakes, cyclones, Ebola crisis or any other natural or man-made crisis, India has responded with speed and solidarity.

In our joint fight against COVID, we have extended medical and other assistance to over 150 countries. We also helped create a SAARC COVID emergency fund in our neighbourhood," he added.