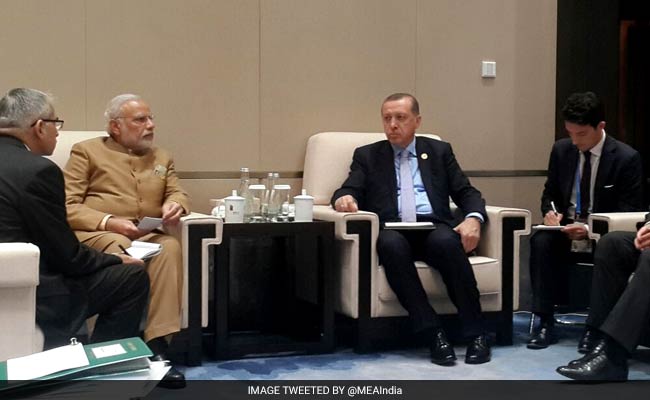 On the second and final day of the summit in Hangzhou, PM Modi met Mr Erdogan and Mr Hollande in separate "pull-aside" meetings.

Prior to that, he met Britain's new Prime Minister Theresa May and held discussions on "building opportunities" in the aftermath of UK's decision to exit the European Union.

The discussion with Mr Erdogan on NSG was significant as Turkey was among the few countries - along with China - which had stalled India's bid to join the elite grouping at its plenary meeting in June in Seoul.

China had then raised objection saying India was not a signatory to the Nuclear Non-Proliferation Treaty (NPT).

Turkey too raised its concern over the presence of supporters of dissident Muslim cleric Fethullah Gulen, who it accusses of masterminding the failed July coup attempt. 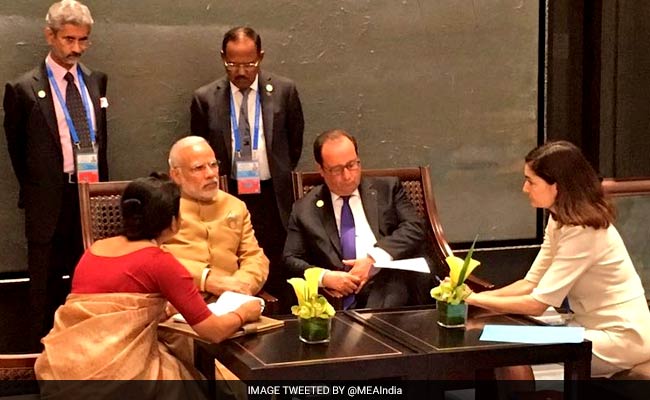 "This isues has also figured," Mr Swarup said. Over 22,000 pages of secret data on the capabilities of six highly-advanced submarines being built for the Indian Navy in Mumbai in collaboration with French defence company DCNS were leaked. The data leak reportedly happened overseas.

With Britain's Prime Minister Theresa May, the Prime Minister underlined that even after UK's exit from the EU, "Britain remains an important partner" for India.

"(Prime Minister) May also referred to the recent passage of GST (bill) which would further boost trade and investment ties with the UK. She supported PM's reform agenda and the UK is keen to participate in Make in India, Smart cities and Skill India initiatives," he said.

They also talked about the challenges of terrorism, calling it "the biggest threat and danger to the world with no boundaries," Mr Swarup said.

PM Modi and Prime Minister May also discussed enhancing counter-terrorism cooperation between India and the UK, the spokesperson said.

Ms May, UK's second woman prime minister after Margaret Thatcher, also underlined the importance Britain attaches to the Indian diaspora in the UK.

PM Modi had congratulated Ms May, who succeded David Cameron after he quit following UK's decision to exit the 28-member world's largest single market EU, on her assumption of the new responsibility on July 27 and had affirmed India's commitment to further strengthen the strategic bilateral partnership.

Promoted
Listen to the latest songs, only on JioSaavn.com
PM Modi was accompanied by National Security Advisor Ajit Doval and Foreign Secretary S Jaishankar during the brief meeting with the French president.