Somnath Chatterjee made parliamentary democracy richer and was a strong voice for the well-being of the poor and vulnerable, Prime Minister Narendra Modi tweeted 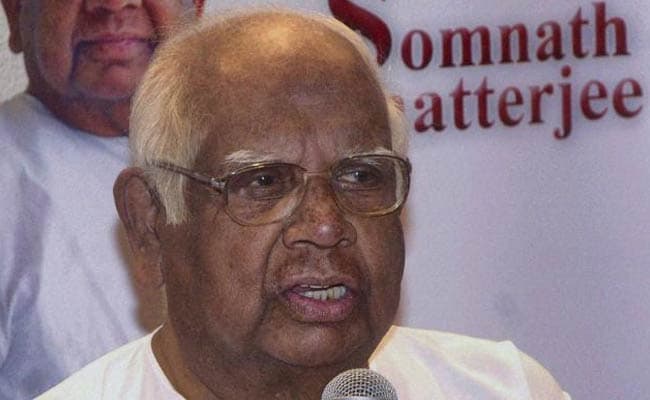 Somnath Chatterjee died this morning in Kolkata; he was 89

Prime Minister Narendra Modi and leaders from several political parties have tweeted condolences on hearing that former Lok Sabha Speaker Somnath Chatterjee has died. He was 89. The 10-time parliamentarian was admitted to a Kolkata hospital with a kidney ailment.

He had been in and out of hospital for the last two months. Doctors said he was undergoing dialysis. In his political career, Mr Chatterjee lost only one election -- to Mamata Banerjee in 1984 in Jadavpur constituency.

A summary of the condolences from leaders of different political parties:

"Former MP and Speaker Shri Somnath Chatterjee was a stalwart of Indian politics. He made our Parliamentary democracy richer and was a strong voice for the well-being of the poor and vulnerable. Anguished by his demise. My thoughts are with his family and supporters," Prime Minister Narendra Modi tweeted.

Sorry to hear of the passing of Shri Somnath Chatterjee, former Speaker of the Lok Sabha and a veteran parliamentarian who had a forceful presence in the House. A loss for public life in Bengal and India. My condolences to his family and innumerable well-wishers #PresidentKovind

Rest in peace now Somnath da. It was an honour to have known you & to have learnt from you. The Lok Sabha was much the poorer by your absence in recent years. India has lost a parliamentary giant today. #SomnathChatterjee

"I mourn the passing away of Shri Somnath Chatterjee, 10 term MP and former Speaker of the Lok Sabha. He was an institution. Greatly respected and admired by all parliamentarians, across party lines. My condolences to his family at this time of grief," Congress president Rahul Gandhi tweeted.

Shocked and extremely sad to learn the passing away of Shri #SomnathChatterjee. A stalwart parliamentarian, popular amongst people and one of greatest Speakers of Lok Sabha. A huge loss to the Indian democracy. May his family and near & dear ones get the strength to cope. #RIP

Saddened at the passing away of former Lok Sabha Speaker Somnath (Da) Chatterjee. My condolences to his family and admirers. This is a great loss for us all

"I am sorry to know about the sad demise of Shri Somnath Chatterjee. In spite of our ideological differences, we cherished a very cordial relationship. My heartfelt condolences to the bereaved family," Foreign Minister Sushma Swaraj tweeted.

My deepest condolences on the demise of Shri Somnath Chatterjee. An outstanding Parliamentarian & Constitutionalist,he remained committed to the cause of people with a firm belief in pragmatic consensus. In his demise I have lost a personal friend &the Nation has lost a great son

Deeply saddened to learn of the demise of former Lok Sabha Speaker and senior leader, Shri Somnath Chatterjee. An erudite & seasoned parliamentarian, Somnathda was known for value based politics. He rose above partisan politics on several occasions. My condolences to his family.

Somnath Chatterjee was the key leader of the CPM, which he had joined in 1968. He became the Speaker from in 2004 when the UPA government led by Manmohan Singh came to power. The veteran leader was, however, expelled from the CPM in 2008 after the Left Front, one of the biggest allies of the UPA, withdrew support from the government over the India-US nuclear deal.

The party wanted Mr Chatterjee to step down as the Speaker and vote against the government during the trust vote. But Mr Chatterjee had refused to resign, maintaining that as Speaker, he was above partisanship and party politics.