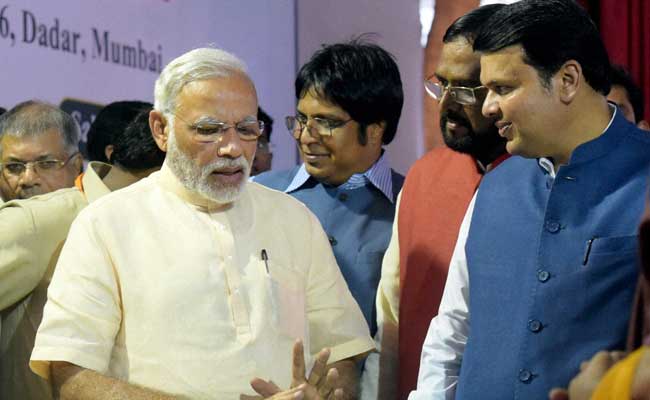 Mumbai: Prime Minister Narendra Modi today laid the foundation stone of a grand memorial to Babasaheb Ambedkar at the Indu Mills compound in the heart of Mumbai, a function boycotted by Shiv Sena whose chief Uddhav Thackeray was not invited.

The memorial, to be developed at a cost of over Rs 400 crore in the city where the Dalit icon and architect of the Constitution lived for several years, is planned to be completed during the tenure of the present government.

No Shiv Sena member of the Fadnavis ministry was, however, present at the event for which party leader Uddhav Thackeray was not invited.

"The reason for staying away of Shiv Sena leaders is that Sena Chief Uddhav Thackeray had not been invited to the Indu Mills function with a narrow view being taken of the protocol," said a Shiv Sena leader said.

Prior to groundbreaking ceremony of the memorial, Mr Modi paid homage at Chaityabhoomi near Shivaji Park, where Mr Ambedkar was laid to rest, a spot visited by followers of the Constitution framer on December 6, his death anniversary.

Architects Shashi Prabhu and Associates, which has been commissioned for the project, proposes to build the memorial on a sprawling 2.50 lakh sq ft area.

The height of the Ambedkar statue will be 150 feet and the memorial will comprise a stupa which will be 140 feet in height and 110 metres in circumference.

There will be a Ashoka Chakra covering the memorial structure and a 'vipassana' (meditation) hall with a seating capacity of 13,000 people.

A section, named as "Gallery of Struggle", depicting momentous events associated with the life and work of Mr Ambedkar, will also be part of the project.

The memorial will cover about 7.4 hectares of the Indu Mill land, acquired from the National Textile Corporation by the state government for the project.

Relieved, Say Sikhs From Afghanistan As They Look For Fresh Start In India