PM Modi laid the foundation stone of six Light House Projects under the Global Housing Technology Challenge-India (GHTC-India) that, he said, has given a scope to innovate and incubate with new technology. 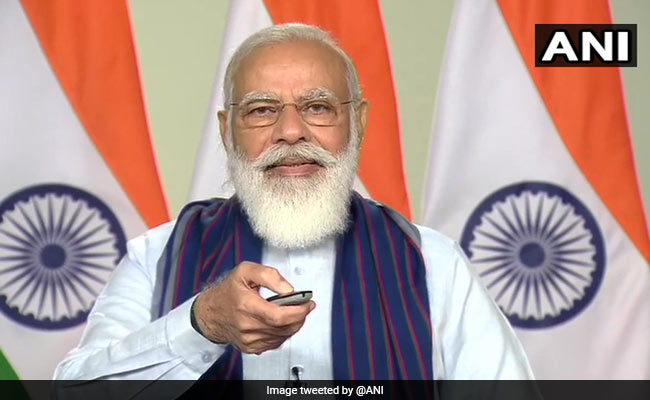 "These six projects will show a new direction to the housing construction in the country," PM Modi said

Prime Minister Narendra Modi today said the Light House Projects being executed with modern technologies in six states will show a new direction to the housing construction sector in the country and further strengthen cooperative federalism.

PM Modi laid the foundation stone of six Light House Projects under the Global Housing Technology Challenge-India (GHTC-India) that, he said, has given a scope to innovate and incubate with new technology.

The programme seeks to build over 1,000 houses each in six cities in 12 months.

"These six projects will show a new direction to the housing construction in the country," he said.

Participation of states from northern, eastern, western and southern parts of the country in this campaign "is strengthening the feeling of our cooperative federalism further", PM Modi said.

Speaking at the event organised virtually, Prime Minister Modi said housing for the poor and the middle-class has been a priority for his government.

He said various measures taken by his government in the last six years has restored the confidence of the common man that he can own a house.

Earlier, he said, people's dream of having a house of their own was shaken as despite spending money they would often not get the promised home in time and were not sure of legal support, if needed. High interest rate was also a dampener, he added.

Construction sector acts as a force multiplier for the economy, he noted and added that his government has taken a number of steps to boost the real estate sector and will continue to do so.

Speaking of the Light House Projects, he said these will be made up of modern technology and innovative processes and reduce the construction time and make a more resilient, affordable and comfortable house for the poor.

He said modern construction practices from countries like France, Germany and Canada will be put into practice.

They will serve as incubation centres, he said, urging architects, planners, engineers and students to visit these projects.

He said today, the country has chosen a different approach, adopting a different route and a better technology to complete the projects faster.

He stressed the importance for the ministries not to have large and sluggish structures, but to be fit like startups.

He expressed happiness on the active participation of more than 50 innovative construction companies from around the world. He said this global challenge has given us a scope to innovate and incubate with new technology.

Besides the Prime Minister, the Housing and Urban Affairs Minister, Chief Ministers of Tripura, Jharkhand, Uttar Pradesh, Madhya Pradesh, Gujarat, Tamil Nadu and Andhra Pradesh were present on the occasion.

The Light House Projects (LHPs) showcase the best of new-age alternative global technologies, materials and processes in the construction sector for the first time in the country at such a large scale, the government has said.

They are being constructed under GHTC-India which envisages to provide an ecosystem for adoption of innovative technologies in the housing construction sector in a holistic manner.

They comprise about 1,000 houses at each location along with allied infrastructure facilities.

Talking about its benefits for the middle-class, PM Modi said they are getting rebates on home loan interest.

Measures like reduction of tax on cheap houses from 8 to 1 percent, GST reduction from 12 to 5 per cent, recognising the sector as infrastructure for making it eligible for cheap loans have taken country's ranking for construction permit from 185 to 27, he said, adding that procedure for construction permissions have been taken online in more than 2,000 towns.

He also said that more than two crore housing units have been constructed in rural India and effort will be on to accelerate the speed of rural housing this year.

Talking about new technologies being adopted for the six Light House Projects, he said that for example, the project in Indore will not have brick and mortar walls, instead they will use the prefabricated sandwich panel system.

The light houses in Rajkot will be built using french technology and have monolithic concrete construction technology using tunnel and the house will be more capable of withstanding disasters, he said.

In Chennai, US and Finland technologies will use the precast concrete system, which will construct the house faster and cheaper. In Ranchi, houses will be built using Germany's 3D construction system. Each room will be made separately and then the entire structure will be added in the same way as Lego Blocks toys.