This is PM Modi's first visit to Jordan and also the first visit by an Indian Prime Minister in 30 years. 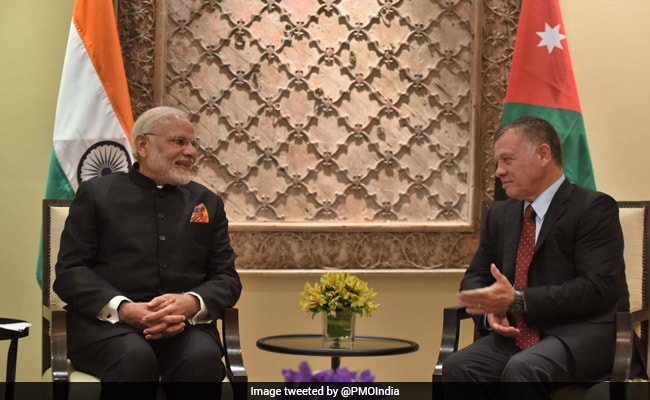 PM Modi arrived in Amman on the first leg of his tour of three West Asian countries, including Palestine.

"Had a wonderful meeting with His Majesty King Abdullah II of Jordan. Our discussions today will give great strength to India-Jordan bilateral relations," PM Modi tweeted after meeting the King.

During the meeting, PM Modi told the King that he is looking forward to his visit to India in February end.

The King, meanwhile, described the meeting as the beginning of a new chapter in the bilateral ties.

Talks between the two sides covered the Palestinian cause, and Jordan's role in protecting Islamic and Christian holy sites in Jerusalem, based on the Hashemite custodianship over the holy shrines, Jordan's state-run Petra news agency reported.

The talks, which were attended by Acting Prime Minister Mamdouh Abbadi, focused on coordination and consultation between the two countries in various fields, as the King highlighted the key role played by India in promoting security, stability and fighting terrorism.

A warm hug between friends reflecting our relationship! PM @narendramodi had a very coordial meeting with His Majesty King of Jordan immediately upon arrival in Amman. In a gracious and personal gesture, the King invited PM @narendramodi to his residence for the meeting. pic.twitter.com/mDw1NG3Dyi

On his arrival, PM Modi was received by Jordan Prime Minister Hani Al-Mulki.

This is PM Modi's first visit to Jordan and also the first visit by an Indian Prime Minister in 30 years. India and Jordan enjoy friendly ties since diplomatic relations were established in 1950, Raveesh Kumar, Ministry of External Affairs Spokesperson, said.

Tomorrow, PM Modi will leave for Palestine where he is scheduled to hold discussions with President Mahmoud Abbas and reaffirm India's support for the Palestinian people and the development of Palestine.

PM Modi will be the first-ever prime minister to visit Palestine.

The Prime Minister will leave for the UAE later in the day for a two-day visit.

He said he will also be addressing the 6th edition of the World Government Summit in Dubai, where India is the guest country.

During the visit, PM Modi said he will engage with leading UAE and Arab CEOs in Dubai on the vast economic opportunities in India and what more can be done to bolster business collaboration.

On the last leg of his trip, PM Modi would travel to Oman from February 11-12.

PM Modi will visit Oman for the first time as prime minister and will hold talks with the Sultan of Oman and other key leaders.

Promoted
Listen to the latest songs, only on JioSaavn.com
He would also interact with leading businesspersons of Oman on developing stronger economic and business links with India.

More than nine million Indians work and live in the Gulf region, of which about one third live in the UAE alone. In Oman, they constitute the largest expatriate community.