PM Modi in US Live: India has developed the world's first DNA vaccine that can be given to everyone above 12 years of age, PM Modi said. 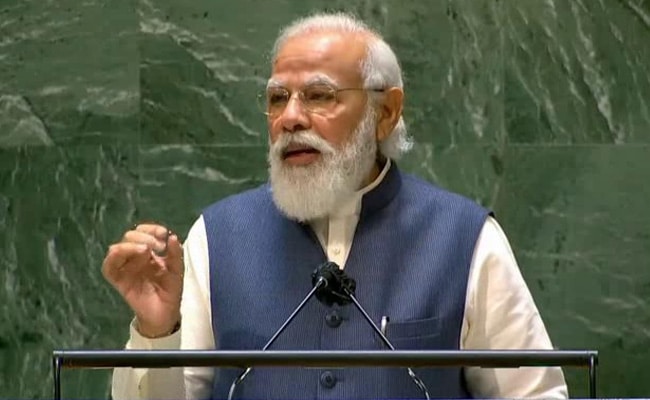 Prime Minister Narendra Modi addressed the 76th session of the United Nations General Assembly (UNGA) today in New York, the first time since the coronavirus pandemic broke out in December 2019. "The strength of India's democracy lies in the fact that a young tea seller is addressing the UN for the 4th time," the Prime Minister said in his opening remarks.

India has developed the world's first DNA vaccine that can be given to everyone above 12 years of age, PM Modi said. "While understanding the responsibility towards humanity, India has yet again started giving vaccines to those who need it," the PM said.

The theme for this year's General Debate is 'Building Resilience through hope to recover from COVID-19, rebuild sustainably, respond to the needs of the planet, respect the rights of people, and revitalise the United Nations''. As per the second provisional list of speakers for the General Assembly, about 109 heads of state and government will address the General Debate in person and nearly 60 will deliver speeches through pre-recorded video statements.

PM Modi flew to New York on Saturday from Washington after holding his first bilateral meeting with US President Joe Biden in the Oval Office of the White House and attended his first in-person Quad summit on Friday.

Here are the updates of PM Modi's US Visit:

Over the last few days, have had productive bilateral and multilateral engagements, interaction with CEOs and the UN address. I am confident the India-USA relationship will grow even stronger in the years to come. Our rich people-to-people linkages are among our strongest assets.

Items largely belong to 11th-14th CE & historic antiquities like copper anthropomorphic object of 2000BC or terracotta vase from 2ndCE. Some 45 antiquities belong to Before Common Era. Half of artifacts are cultural, other half are figurines relating to Hinduism, Buddhism&Jainism pic.twitter.com/jw6tEFxuLZ

157 artefacts & antiquities were handed over by US during PM Modi's visit. PM conveyed his deep appreciation for repatriation of antiquities to India by US. PM Modi & Pres Biden committed to strengthen their efforts to combat theft, illicit trade & trafficking of cultural objects pic.twitter.com/WI8PUewF8A

Sep 25, 2021 21:17 (IST)
PM Modi at UNGA cautioned ''terrorism as tool is double-edged sword'': Harsh Vardhan Shringla
PM Modi in his UNGA speech said that countries that are using terrorism as a "political tool" must understand that terrorism is an equally big threat to them.
"The Prime Minister also referred to the most pressing issue of today, which is topic of conversation of almost all heads of state or government who spoke at United Nations, that is, the situation in Afghanistan,"  Harsh Vardhan Shringla said.
"He said countries using terrorism as a tool should note that it is a double-edged sword. I think that is a very important point to make. You cannot think of encouragement to terrorism because that can come back to bite you," he added.
Sep 25, 2021 21:01 (IST)
PM Modi's visit to US very successful, comprehensive, says Foreign Secretary
"Prime Minister Narendra Modi address to the General Assembly marks the culmination of a very successful and very comprehensive tour of the United States," Harsh Vardhan Shringla told the media after PM Modi's address at the UNGA.
Sep 25, 2021 20:52 (IST)

PM Narendra Modi meets people gathered outside his hotel in New York. He is about to depart for John F Kennedy International Airport from where he will leave for India. pic.twitter.com/GFgMwXFUxU

Welcomed PM Narendra Modi to the General Assembly Hall, ahead of his address to General Debate #UNGA76. India is fully committed to multilateralism & to the United Nations. I thanked him for the continued support to the Presidency of Hope: Abdulla Shahid, President of the UNGA76 pic.twitter.com/L1YOvsVlbQ

#WATCH | PM Modi says at UNGA,"...Countries with regressive thinking that are using terrorism as a political tool need to understand that terrorism is an equally big threat for them. It has to be ensured that Afghanistan isn't used to spread terrorism or launch terror attacks..." pic.twitter.com/YCr85QGMby

It is absolutely essential to ensure that Afghanistan's territory is not used to spread terrorism and for terrorist activities: PM Modi at UNGA pic.twitter.com/IkmBPM6Kbo

PM Narendra Modi arrives at the UN Headquarters to address the 76th Session of the United Nations General Assembly in New York pic.twitter.com/QBRCrNBJH8

In a short while from now, PM @narendramodi will be addressing the @UN General Assembly. pic.twitter.com/cSUxG49JXM

Sep 25, 2021 18:11 (IST)
PM Modi raises issue of H-1B visas with US President Biden: Foreign Secretary Harsh Vardhan Shringla
Prime Minister Narendra Modi in his first-ever in-person meeting with President Joe Biden raised a number of issues involving the Indian community in America, including access for Indian professionals in the US and speaking about the H-1B visas, Foreign Secretary Harsh Vardhan Shringla has said.
Prime Minister Modi described as "outstanding" his first bilateral meeting in the Oval Office with US President Joe Biden who said the Indo-US relationship is destined to be "stronger, closer and tighter".
The prime minister and his counterparts - Scott Morrison of Australia and Japan's Yoshihide Suga - also attended the meeting of Quad leaders hosted by US President Biden in the US capital on Friday.
"He (Modi) spoke of the issue of getting access for Indian professionals to the United States. In that context he mentioned H-1B visa," Mr Shringla told reporters at a news conference on Friday.
Sep 25, 2021 17:51 (IST)

FS @harshvshringla met Minister @tariqahmadbt of the UK Foreign Office at New York in the margins of UNGA for a discussion on issues including situation in Afghanistan. Lord Ahmad conveyed that UK authorities were working to resolve quarantine issue for Indians entering the UK. pic.twitter.com/stJ5GUV6xg