PM Modi said the veteran leader perfectly summed up the true essence of the party. 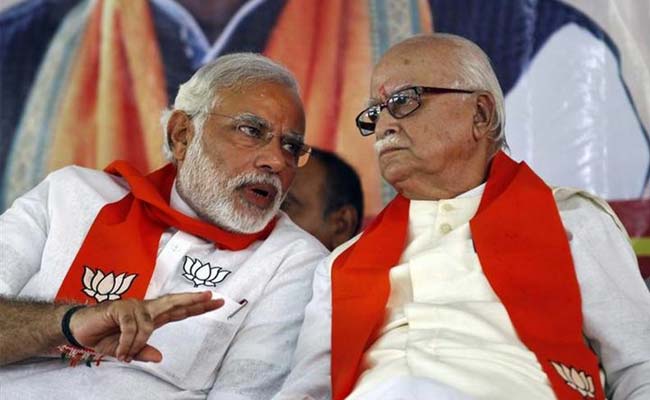 After veteran leader LK Advani urged in a blog on Thursday that the BJP should "look back, look ahead and look within", Prime Minister Narendra Modi later in the evening said that the veteran leader perfectly summed up the true essence of the party.

"Advani Ji perfectly sums up the true essence of BJP, most notably the guiding Mantra of 'Nation First, Party Next, Self Last.' Proud to be a BJP Karyakarta and proud that greats like LK Advani Ji have strengthened it (sic)," PM Modi tweeted.

Mr Advani, 91, has been benched by the BJP ahead of the national election that begins next week and has been upset since. Breaking his silence in a blog titled "Nation First, Party Next, Self Last", he said that the party never regarded his critics as "enemies" or "anti-nationals", and stressed on "democracy and democratic traditions" within.

"Defense of democracy and democratic traditions, both within the party and in the larger national setting, has been the proud hallmark of the BJP," Mr Advani had written.

"The essence of Indian democracy is respect for diversity and freedom of expression. Right from its inception, the BJP has never regarded those who disagree with us politically as our 'enemies', but only as our adversaries."

He said similarly, "in our conception of Indian nationalism, we have never regarded those who disagree with us politically as anti-national. The party has been committed to freedom of choice of every citizen at personal as well as political level."

The BJP veteran, who has held the Gandhinagar Lok Sabha constituency for six terms, was shafted last month and the seat assigned to BJP chief Amit Shah to contest.

Mr Advani, who was Deputy Prime Minister in the BJP government that Atal Behari Vajpayee led nearly two decades ago, was hurt at the way he was pink-slipped. The party has dropped many leaders on the basis of its 75-plus age ban, but Mr Advani and Murli Manohar Joshi had been exceptions in 2014. But while the BJP scored big in those elections, the old-timers were eased out of decision-making and made members of a mentors' club, the "Margadarshak Mandal".