PM Modi Will Name India After Himself Someday: Mamata Banerjee

"Narendra Modi only makes big promises. I will do this, I will do that.... You have been in power for six-seven years. What have you done?" Mamata Banerjee asked. 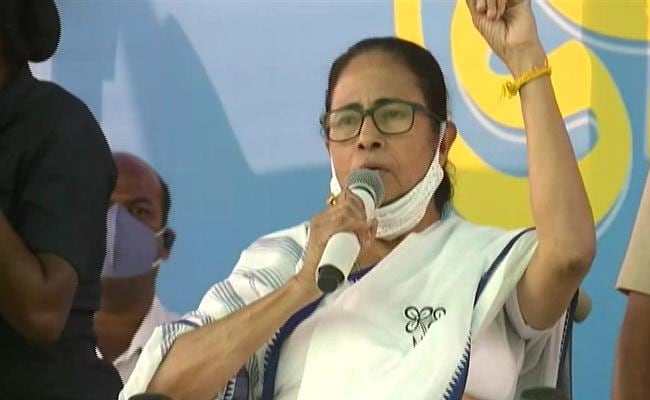 "Sometimes, he thinks of himself as poet Rabindranath Tagore, sometimes as Vivekananda," she said. (File)

West Bengal Chief Minister Mamata Banerjee on Saturday said that Prime Minister Narendra Modi considers himself to be Rabindranath Tagore and Swami Vivekananda and would name India after himself.

Addressing a public meeting in Khejuri, Ms Banerjee said, "What a great leader. Sometimes, he thinks of himself as poet Rabindranath Tagore...Sometimes as Vivekananda. Now, he is changing the stadium's name with his own name. Someday he will make you forget the name of India. He will name the country after himself."

Continuing the attack, she said, "Narendra Modi only makes big promises. I will do this, I will do that.... You have been in power for six-seven years. What have you done? You did 'notebandi'. You have destroyed the economy of the country. You have increased unemployment. You have killed migrant workers. You have created riots."

After the Prime Minister, Ms Banerjee next targeted the Bharatiya Janata Party (BJP) at the centre. She accused the central government of misappropriating funds.

"BJP says 'beti bachao, beti padhao'. But, they have not even given a single penny to anyone. But we give 'kanyashree' fund every month. The BJP is getting jealous because Bengal is going ahead today," she stated.

"They called others 'tolabaaz' (extortionist). The BJP government has stolen millions of crores of rupees. They are the feudal lord of 'tolabaazi' (extortion)," added Ms Banerjee.

The BJP and the Trinamool Congress (TMC) are at loggerheads in poll-bound West Bengal. The top leadership of the BJP has been holding public meetings and roadshows across the state in recent months.

Elections to the 294-member state Assembly will be held in eight phases starting from March 27 with the final round of voting taking place on April 29. The counting of votes will take place on May 2.