PM Modi was in Russia on a two-day visit to attend the Eastern Economic Forum in Vladivostok. He arrived back in New Delhi on early Friday morning. 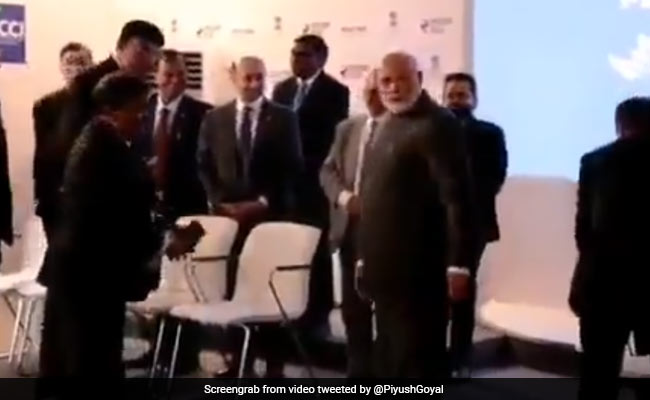 PM Modi opted for a chair to sit with others during a photo session in Russia.

Prime Minister Narendra Modi refused a comfortable sofa kept for him at a photo session and opted for one of the chairs arranged for officials, during his recent visit to Russia. A video of the PM's gesture, tweeted by Commerce Minister Piyush Goyal, has become a rage online with many praising PM Modi for his simplicity.

The video, apparently from Tuesday, shows PM Modi looking at the plush couch that officials lead him to and refusing to sit on it. He has the officials remove the sofa and asks for an ordinary chair for the photo session. "Prime Minister Narendra Modi's simplicity was on display today as he got the special arrangement for him removed and chose to sit on a common chair along with others," Mr Goyal tweeted in Hindi as he shared the video.

"What a lovely gesture. There are no words. See the simplicity," a Twitter user said.

"We have a humble and sober Prime Minister who is down to earth," said another.

"Modiji''s simplicity makes him the most respected n powerful leader in the world fraternity. The conviction, clarity with which he talks n conveys his message. He knows what''s best 4 the nation. He''s soft 4 good people but very hard 4 those who try to harm the nation. He''s truly our PM," a user tweeted.

PM Modi was in Russia on a two-day visit to attend the Eastern Economic Forum in Vladivostok.

He returned to arrived back in New Delhi on early Friday morning.