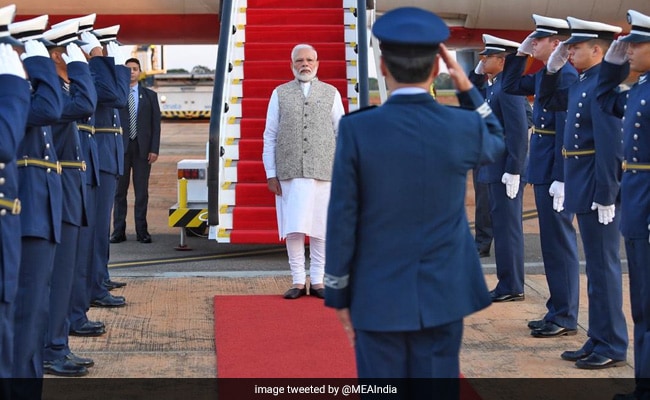 BRICS Summit: PM Modi will meet heads of state of BRICS nations at the summit for bilateral talks

Prime Minister Narendra Modi arrived in the Brazilian capital today to take part in the BRICS summit which will focus on building mechanisms for counter-terrorism cooperation and strengthen India's ties with the world's five major economies.

On the sidelines of the 11th BRICS summit, PM Modi will also meet Brazilian President Jair Bolsonaro to discuss ways to enhance the bilateral strategic partnership.

During the summit, the five major economies of the world will aim to significantly strengthen their cooperation in science, technology and innovation, PM Modi said in his departure statement.

The BRICS countries will also look to enhance cooperation on digital economy and build mechanisms for counter-terrorism cooperation within the BRICS framework, Prime Minister Modi said.

This is the sixth time PM Modi is participating in the BRICS summit, his first being at Fortaleza, also in Brazil in 2014.

He would also attend the BRICS business forum closing ceremony and the 'closed' and plenary sessions of the summit.

In the closed session, the discussions are expected to be focused on challenges and opportunities for the exercise of national sovereignty in the contemporary world.

This will be followed by the BRICS Plenary Session, where the leaders will discuss the intra-BRICS cooperation for the economic development of BRICS societies.

A BRICS memorandum of understanding between trade and investment promotion agencies is expected to be signed. The participating leaders would also be issued on the conclusion of the summit, according to the Ministry of External Affairs.