PM Modi will hold wide-ranging talks with Myanmar's State Counsellor and de facto leader Aung San Suu Kyi today. He is expected to raise the exodus of the ethnic Rohingyas into neighbouring countries. 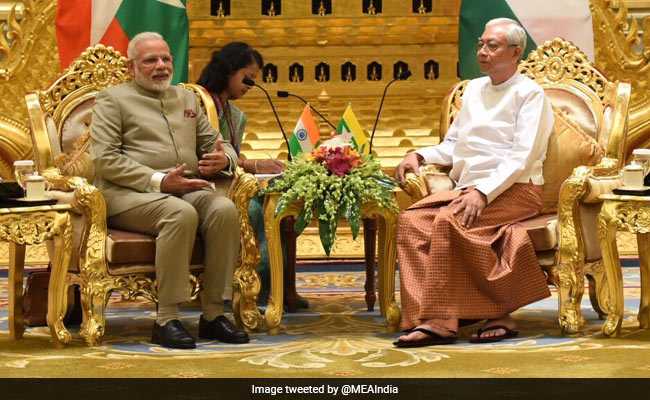 PM Modi is on a three-day visit to Myanmar, his first bilateral trip to the country.

Prime Minister Narendra Modi on Tuesday said he had a "wonderful meeting" with Myanmar President Htin Kyaw during which they discussed steps to deepen the "historical relationship" between the two neighbours.

PM Modi called on President Kyaw soon after he arrived in the country on his first bilateral visit.

"Had a wonderful meeting with President U Htin Kyaw," PM Modi tweeted along with some pictures of the meeting. He also presented the Myanmar president a reproduction of a 1841 map of a stretch of the River Salween (that flows from the Tibetan Plateau into the Andaman Sea) and a sculpture of the Bodhi tree.

PM Modi reached Nay Pyi Taw on the final leg of his two- nation visit after attending the BRICS Summit in China.

The prime minister's visit to Myanmar comes amid a spike in ethnic violence with Rohingya Muslims in the Rakhine state.

PM Modi will hold wide-ranging talks with Myanmar's State Counsellor and de facto leader Aung San Suu Kyi today. He is expected to raise the exodus of the ethnic Rohingyas into neighbouring countries.

The Indian government is concerned about Rohingya immigrants in the country, and has been considering to deport them. Around 40,000 Rohingyas are said to be staying illegally in India.

Ahead of his visit, PM Modi had said India and Myanmar were looking at strengthening existing cooperation in areas of security and counter-terrorism, trade and investment, infrastructure and energy, and culture.

This is PM Modi's first bilateral visit to Myanmar. He had visited the country in 2014 to attend the ASEAN-India Summit.

Promoted
Listen to the latest songs, only on JioSaavn.com
The Myanmarese president and Suu Kyi had visited India last year.

Myanmar is one of India's strategic neighbours and shares a 1,640-km-long border with a number of northeastern states including militancy-hit Nagaland and Manipur.