The electric auto maker has registered its Indian subsidiary under the name "Tesla India Motors and Energy Private Ltd". 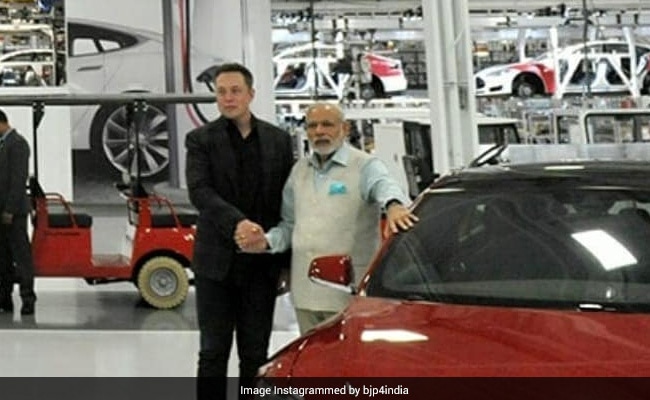 A photo of Prime Minister Narendra Modi and Elon Musk next to a gleaming Tesla car was posted on Instagram by the ruling BJP today, reflecting the excitement in India over the company's upcoming base in Bengaluru.

"PM Narendra Modi interacting with the CEO of Tesla in San Jose in 2015," read the post that re-plugged the Prime Minister's visit to the Tesla campus.

The photo showed the two shaking hands as they smiled for the cameras at Tesla Motors campus. The Prime Minister was given a one-hour tour of the facility when he visited the US five years ago.

In the BJP's post, the photo was captioned: "Tesla drives into India with Bengaluru unit".

The text said: "World's leading electric car manufacturer Tesla Inc, which had expressed its intent of starting operations in India, finally set up its office in Bengaluru. On January 8, the electric vehicle manufacturer set up its company 'Tesla India Motors and Energy Private Limited" in India with its registered office in the capital of Karnataka.

Yesterday, Elon Musk had replied to an article on Tesla's India plan with the words: "As promised".

It was seen to refer to his tweet in October in response to a T-shirt with the message: "India wants Tesla". The Tesla CEO had replied, "Next year for sure".

Karnataka Chief Minister BS Yediyurappa confirmed in a tweet earlier this week that the carmaker is setting up an R&D unit in Bengaluru.

"Karnataka will lead India's journey towards Green Mobility. Electric Vehicle Manufacturer Tesla will soon start its operations in India with an R&D unit in Bengaluru. I welcome Elon Musk to India and Karnataka and wish him all the very best," he wrote.

The electric auto maker has registered its Indian subsidiary under the name "Tesla India Motors and Energy Private Ltd". The company is expected to start operations by June. The first product to be sold will be the Model 3 sedan, according to reports.